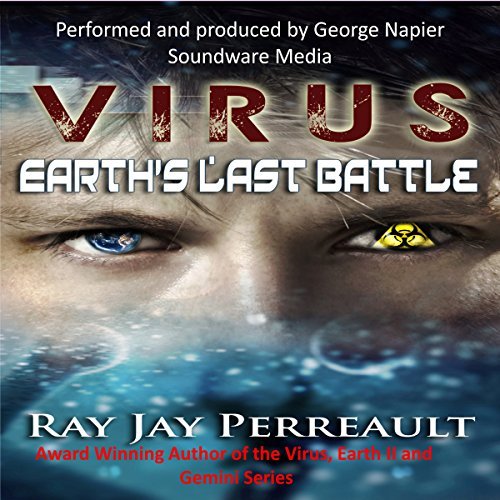 Earth was attacked by a suspicious virus (Bk1), the remaining survivors deal with the Post-Apocalyptic World(Bk2), then face the alien invaders(Bk3) and begin to explore the universe (Bk4).

SIMPOC, the advanced thinking computer, supports the remaining humans as they try to put their world back together. The other computer waits to remove the two threats to its existence; humans and SIMPOC.

They suspect the source of the virus, then their worst fear appears in their skies, and they face the end of the human race.

This book is the continuation to ‘Virus: 72 Hours to Live‘, and the human side of ‘SIMPOC 2‘. Here we witness how the humans left on Earth get ready for what is coming.

I always enjoy Perreault’s books. He proposes a believable scenarios with down to earth characters. I remember enjoying the SIMPOC novels, and the Virus series is an expansion of it. I missed some of the technical aspects from SIMPOC but I think the Virus series is more approachable for the general public.

There are several events happening in parallel, and the tension is palpable for most of the book. I grew especially attached to Joan and her husband. I found it a bit surprising that SIMPOC 2 and this book tell the same events from different POV’s (AI’s vs. humans) and the length of the later is three times of SIMPOC 2. In my opinion, this book drags a bit in some parts, and the surprise factor is mostly gone if you have read SIMPOC 2. Nevertheless, both novels complement each other well, but I still prefer the ones from the AI’s POV.

The first book and both SIMPOC novels had been narrated by Zachary Johnson, so I was surprised that for this one Perreault decided to change and have a completely different production, with several narrators and sound effects. The background sounds were lower than in other audiobooks, which I am glad for, but the sound effects applied to some of the voices sacrificed intelligibility. For me, an audiobook is something that I can listen to at any time of the day, and that allows me to multitask. If sound FX and other things like music are introduced, it becomes a different kind of product, to be listened in a quiet environment and a different level of attention. Sadly, this is just not for me, but I see the appeal that it can have for some people.

The book ends on a cliffanger, like SIMPOC 2. I am anxious to know what’s next, I’m sure Perreault has something good in store for us.