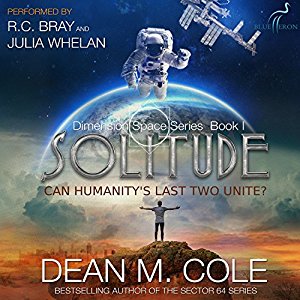 Earth’s last man discovers that the last woman is stranded alone aboard the International Space Station. If you like action-packed novels, you’ll love the electrifying action in this apocalyptic thriller.

Separated by the gulf of space, the last man and woman of the human race struggle against astronomical odds to survive and unite.

Army Aviator Vaughn Singleton is a highly intelligent, lazy man. After a last-ditch effort to reignite his failing military career ends horribly, Vaughn becomes the only human left on Earth.

Stranded alone on the International Space Station, Commander Angela Brown watches an odd wave of light sweep across the planet. Over the next weeks and then months, Angela struggles to contact someone on the surface, but as she fights to survive aboard a deteriorating space station, the commander glimpses the dark underpinnings of humanity’s demise.

After months alone, Vaughn discovers there is another. Racing against time, he must cross a land ravaged by the consequences of humankind’s sudden departure.

Can Vaughn find a path to space and back? Can Angela – the only person with clues to the mystery behind humanity’s disappearance – survive until he does?

Author, world traveler, and combat pilot turned commercial helicopter pilot Dean M. Cole writes from locales as remote as Equatorial Guinea and as romantic as Paris’s Champs-Elysées with his trusty sidekick and beautiful wife, Donna. A combat veteran, he flew Apache Attack Helicopters in the US Army’s First Cavalry Division.

License to kill revoked by the government, he traded in his attack helicopter for one of the transport ilk. When not weaving tales of alien apocalypse and redemption, he spends his days flying terrestrial aliens in IFOs (Identified Flying Objects) known as helicopters. No longer authorized to dispatch aliens he settles for dropping them off at oil rigs around the globe.

On the six months of time off his paying job affords, author, biker, and fellow Sci-Fi geek Dean M. Cole travels with his wife, builds airplanes and custom choppers, and writes his next tale of the apocalypse.

And audiobooks? Even worse. Those were for people too lazy to read (not to be confused with those like himself who didn’t want to read to begin with).

R.C. eventually got older and wiser (he was always good-looking) and eschewing his capricious convictions fell head-over-heels with reading. Not just to learn words like “eschew” and “capricious” so he could use them in a bio line, but because someone was actually going to give him money to do it.

Note: R.C.’s gorgeous wife and three beautiful children begged him not to make this his official bio. Clearly he misunderstood

Julia Whelan is an actor, writer, and audiobook narrator. She is perhaps most well known for her acting work on ABC’s Once and Again and her award-winning narration of over 200 audiobooks (including Gillian Flynn’s Gone Girl). Her debut novel is forthcoming.

After a healthy career as a child actor, Whelan attended Middlebury College and Oxford University, graduating with a degree in English and Creative Writing.

I received this audiobook as part of my participation in a blog tour with Audiobookworm Promotions. The tour is being sponsored by Dean M. Cole. The gifting of this audiobook did not affect my opinion of it.

On board the International Space Station, Angela Brown and her crew observe a strange phenomena which seems like a ring of light swiping the Earth. They get a transmission from mission control informing that they have lost contact with Europe, where it seems the light has been originated, and that they should get ready to return home just in case the ring of light will kill communications in the US too. Due to the rush Angela is left behind, and she will be able to witness what the ring of light is really doing. At the same time, Army Aviator Vaughn Singleton is testing a new vehicle in vacuum, simulating space conditions, and technically disconnected from Earth, when he also observes the strong light. After interrupting the test he finds that there is nobody else around. All human and animal life have disappeared and this should be somehow related to the strange light. Talking to the director of Nasa, he is informed that Commander Brown needs to be saved, but Vaugh is too busy wallowing to realize the urgency of this.

I found the premises of this book amazing. Give me a sci-fi book and a weird phenomena that needs to be investigated and I am happy. I got totally hooked to the story from the beginning. I was intrigued about the ring of light, just as Angela, who could witness it from a privileged place. This is the second book I listen to lately in which part of the action occurs on the ISS, and I still find it a very compelling scenario. I missed some details though, about how many rations were left and what they were composed of. She had limited supplies and was starving, that was clear, but I think some more information there would have helped to get the listener more invested in Angela’s destiny.

Vaughn was not a very likable character, too self-absorbed and too busy with pitying himself to realize on time that he has an important mission. During this time we get flashes about how he is getting wasted. I would have appreciated more insight on his thoughts to be able to better connect with him.

In many occasions the characters are referred by their name, their job or simply ‘the man’ or ‘the woman’. I found this to be rather confusing, since there was no one else, and starting a paragraph with ‘The man’ automatically made me think that Cole was referring to someone else, when I perfectly knew that this was not possible. I think this and the constant repetitions is something that could have been polished.

The story is very exciting, and one wonders how the heck Vaughn is going to succeed in what he plans. There are many trials and errors, though, and some people compare this to ‘The Martian’. It is true that this sentence is true for both books, but I find the execution quite different on and and the other. While The Martian was full with details, I found here some information delivered in a more ambiguous way. It is not a criticism, since some people can be overwhelmed by too much information.

I have to confess that I was a bit annoyed by how the narration was planned for this book. The chapters narration alternates between Julia Wheelan and R.C. Bray. They are both great narrators but these switches are a bit uncomfortable for the listener at least the first times. Wheelan is responsible for narrating the chapters about Angela, and Bray the ones about Vaughn. I almost expected that when both characters met, the dialogs were going to be done by both narrators, but this chapters alternation was done until the end. It felt strange to hear Angela and Vaugh interpreted by one narrator and the next chapter both interpreted by the other one. I agree that the way it was done adds interest to the story, but I just like traditional narration, with just one narrator.

Both narrators are top notch, and they perform as we all expected. It is always a pleasure to count with such great professionals.

I really enjoyed the book, despite the couple of details already mentioned. It was an honor to have been able to review this audiobook. I am looking forward to future books in the series.

Jun. 18th: The Pursuit of Bookishness