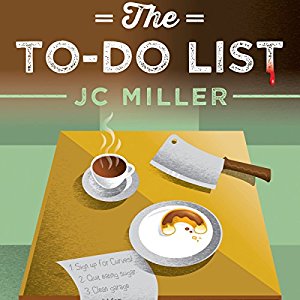 I have received this book in audio format from the author in exchange for an honest review.

Ginny’s life is starting to crumble. She cannot keep her weight down, her husband is having an affair and her teenage son and daughter seem out of control. Things are not good either at the library where she works. Buried in a pile of tasks, Ginny makes a to-do list every morning, but in the end very little from it she can accomplish. She needs a change in her life, when she suddenly stumbles upon a dating site.

I really liked the premises of this book. A story about a woman in her forties reaching a dead end definitely has place for great events and personal growth. I somehow expected something grand to happen here to Ginny, but it is like that moment never came. I partly understood her attitude, as I have witnessed people in similar situations, and I expected something to click inside her at some point, but she made mistake after mistake, and at moments I just wanted to shake her and tell her to think things twice. I guess it is easy to see things from outside, and in the end, she indeed reacts, but we do not really witness that. We see that Ginny is a mess, Ginny improves a little but she is still a mess, and just at the end of the book, it is mentioned that she moved on and made a smart move. I somehow missed that final stage of the evolution, and felt that we were just given a part of the story.

The book is full of things that could have been but were not. Ginny is indeed scared of doing many things, but as I have said before, I missed the part of her evolution in which she dared to do new things. She had also suspicions about some of the other characters in the book, which not were explained, so I guess it was all in her mind, but I think a deeper character developing would have worked better here.

Something that felt strange to me when I started to listen to this book is that it was written in third person. I think a story like this one would have worked better in first person, and would have made us feel closer to the main character.

I really liked Sarah K. Sheckells’ narration. She expressed very well Ginny’s insecurities with her tone and cadence, as well as doing a great interpretation of the rest of characters. I have a small comment though. There was some background noise in general, that got a little worse at times. It was evident at the end of each chapter because there was a short instant of completely silence. I think adding the same background noise to those parts would have helped to mask it. I also felt the pause between chapters a bit abrupt and on the short side.

I enjoyed this book, even though I did expect more from it. Sheckells’ narration has improved the final product and I am looking forward to listening to more books narrated by her.