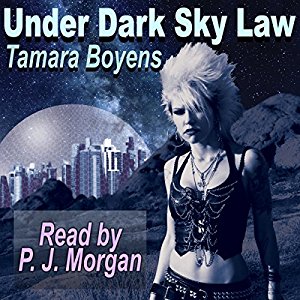 My original nder Dark Sky Law audiobook review and many others can be found at Audiobook Reviewer.

Xero works as a double agent, getting medicines for the government, and as a drug dealer outside the civilized areas. Her main goals are making money through selling drugs and finding a very valuable antibiotic to cure her friend Trina of a fatal disease.

I decided to review this book because it was a dystopian novel, but it could have been a novel about wars between Mexican cartels set in our current time. There was very little information about the historical background and how the world worked. At least I would have appreciated a brief explanation about how the world became the one in the book. This made the novel fail for me.

The characters are archetypes, and the first half just shows how ruthless and efficient Xero can be. In a couple of occasions the text indicates that she has a certain age, but from her immature acts and her thoughts she does not seem older than a teenager to me. The same goes for her crew. The first goal from the beginning was finding the antibiotic for her friend, which had not been introduced to us. For the reader, this goal seems less urgent if we do not know Trina and how important she is for Xero. We will see this during the second half of the book, but in my opinion, their relationship should have been described way earlier, since the book felt quite pointless until then. Trina felt just an excuse to showcase Xero and her abilities.

On an occasion one of the characters was mentioned to look like a surfer. I am aware that outdated expressions could be something common, but this one felt completely out of place. From the few descriptions I don’t think there was anybody practicing surf in the world, and I do not know whether there were surfers in Xero’s lifetime.

I do not mind foul language, and I think it is necessary in some books to make them realistic, but it was just too much in this book.

The narration was quite monotone and P.J. Morgan needs to learn to vocalize, especially when making male voices. About female voices, the repertoire was small and they sounded the same (except for when there were different accents involved) and I had troubles to discern who was talking at some points.

Even though this novel feels a bit immature, it was still interesting enough to keep listening, and I hope Tamara Boyens will continue to write after doing the necessary research.