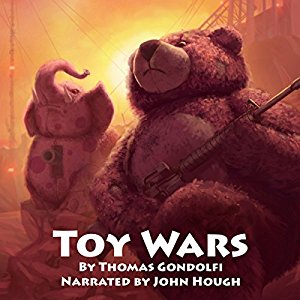 My original Toy Wars audiobook review and many others can be found at Audiobook Reviewer.

Humanity has discovered how to travel at FT2L, the double of FTL, Faster than Light Speed. There is just a problem: organic matter will not survive traveling at this speed, so ships able to travel at FT2L will just transport semi-intelligent central units (named factories) able to construct robots in order to mine far away planets and collect precious inorganic materials. Just before the take off of six of these vessels, a hacker gets into the system and leaves a virus by accident, making those six ships to aim for the same planet, and switching the robot plans for toy blueprints from a toy factory. Four ships make it to the planet and start production successfully, but as one of the goals is gaining complete control of the planet, they will start fighting each other to gain supremacy.

The experiments of one of the factories on Teddy 1499 will make him become sentient, and with time he will realize that they are just fighting other factories and that the only way to reach their goals will be to find peace and unite. This is the journey of Teddy 1499 on this new world, fighting for something nobody believes in.

This is a very clever book. The name sounds almost cute, but there is nothing cute about this book. I would consider it hard sci-fi, and a kind of experiment mixing some out of the normal elements. Two meter teddy bears with guns, big elephant dolls, nurse nuns patching the fallen in battle. This is the normal world for Teddy 1499, who starts questioning how things work and experiments thinking ‘outside the box’. This story is one of those that could have been born after a ‘what if’.

I enjoyed the experiment but it took a long time to take off. I think Tom Gondolfi spent too much time with the exposure. It is not that it did not have useful information. It had, but I found it a bit distracting, and I was impatient to start the story.

I enjoyed the evolution of Teddy 1499, and how he was also amazed by it. We travel a long journey with him and it is impossible to not feel something for him. In a way, it is an endearing story.

John Hough’s narration was clear but I found it a bit too theatrical at times. It could have been appropriate, since he was giving voice to toys, but I think I would have preferred a more neutral narration. It was very good though, and the production had a high quality.

This book is not for everybody, not even for every science fiction lover, but I would recommend it to anyone who enjoys hard sci-fi and would like something different.