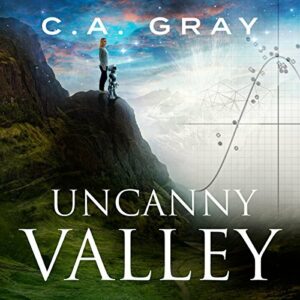 Have you ever sensed that something isn't quite right, even if you can't explain why?

Rebecca Cordeaux knows exactly what her future will hold: she will marry Andy, her crush of the last five years. Once Andy is ready to settle down, she’s sure he will discover that she is his soulmate. After several small parts on stage, Rebecca knows she can become a renowned actress. Her writing also shows promise as a future author. Robots perform most human jobs that can be automated, leaving many free to pursue their personal creative interests.

But Rebecca's mother Karen fears the new world of robots, and insists her brilliant daughter join a university research team, studying the hazards of a complete robotic economy. Rebecca's father Quentin was obsessed with the subject to a degree that even her mother considered absurd, prior to his untimely death. So long as she can reserve enough of her time to pursue her true passions on the side, Rebecca half-heartedly agrees to join the research team, if only to please her widowed mother. There she joins a post-doc named Liam, whose conspiracy theories rival even those of her late father. Liam is convinced that world Republic leader William Halpert’s worldwide challenge for researchers to develop synthetic creativity will lead not to the promised utopia, in which every kind of human suffering has been eradicated, but rather to an apocalypse. Rebecca, whose best friend is her own companion bot Madeline, writes Liam off as a bot-hating conspiracy theorist, just like her father was… until she learns that her father’s death might not have been due to mere happenstance.

With Liam’s help, Rebecca learns of an underground organization known as The Renegades, where Quentin Cordeaux was considered a legend. While Liam attempts to stop Halpert’s challenge if he can, Rebecca tries to unravel the mystery of what happened to her father. Did he and many of his contemporaries die for something they knew? Who is the mysterious informant who calls himself John Doe, and only seems to want to drive her out of harm’s way? And if Halpert’s challenge is answered, will it usher in a brave new chapter in humanity’s history… or were Quentin Cordeaux’s dire predictions right all along?

My original Uncanny Valley audiobook review and many others can be found at Audiobook Reviewer.

Rebecca Cordeaux is a neuroscience student, and with interest in many other areas. Set in a future where robots have largely evolved to the point that some are afraid that they will one day eliminate the human race, Rebecca is put in charge of investigating where creativity and moral lay, in order to prevent robots to take our place in the world.

This was a quick and easy read, but I had issues connecting to the main character. It could be due to the fact that she was twenty-one but behaved like a teen, since I have been able to enjoy other YA novels. I also had troubles in getting invested in the main conflict in the book: on one hand we have the government willing to create better robots, and on the other hand there is a group called The Renegades, trying to prevent the dangers that improved robots could bring. The first part of the book was quite interesting and rose elaborate questions about the human nature and whether those aspects could be also applied to robots and how. The second part was not very plausible, and partially lost my interest because I did not really believe in it.

Rebecca is a young woman, but emotionally very immature. There is romance in the book, unnecessary but also predictable. And talking about predictable, there were some other things that I guessed quite early in the story, and I wanted to shake Rebecca and tell her so.

There was little world building. My guess is that this book was set around the 30th century, since our time is mentioned as the Second Age. It would have been nice to have more details about the world and the society. The only thing that is clear is that traveling has become something fast and cheap, since Rebecca and Liam travel from Dublin to San Jose in what it is called a quantum train, and it seems this is a quite quick trip. In a way, this means of transportation reminded me a lot of the one in ‘Logan’s Run’.

The end felt so rushed that when I was approaching it, I was wondering if I just did not have the complete book. This book is the first in a series, and it ends on a massive cliffhanger that got me by surprise.

Melissa Williams’ narration was okay but it felt a bit stiff at times. She did a good job becoming Rebecca, but I missed some differentiation between characters. Also, Madeline’s voice didn’t really match my view of the little robot. She sounded more like an old woman than a little female robot.

All in all, it was a decent listen, but it’s one of those novels exclusively for teens and YA, since the characters are all quite immature, and there is a lot of the philosophical talk typical of high school students.