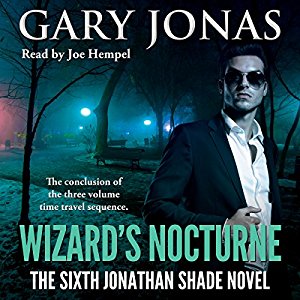 A MURDER IN LAYERED TIME

In the conclusion of the three-volume time travel sequence, Jonathan Shade is sent back to 1926 to kill an upstart wizard named Henry Winslow.  Henry wants to die because in order to achieve his goal of immortality, he must first achieve resurrection.

PAWNS IN A LARGER GAME

Jonathan Shade and Kelly Chan are part of a larger plan playing out across time, and while Henry Winslow is a major player, there's someone else acting as the mastermind, and his name is Jonathan Shade.

Shade's plan relies on changing the way things happened in the twenties...but if things change too much, there won't be a future to which any of them can return.

This is the much expected conclusion to the time travel series. We left Jonathan taking care of Henry Winslow and approaching the moment where Reina travels to the past. Despite Jonathan’s efforts, things take a turn for the worse and he will have to fix it and make everything fit in the great scheme of things.

I was looking forward to this book and see how things were going to end up. I confess that I had little issues following the twists and paradoxes inside the time travel timelines. Try to have the previous two books fresh in your mind, since there is no introduction summarizing the previous events, and that mixed with the complexity of the story in this book may get you listening again to some passages to completely grasp it. There was a lot of explaining at the end of the book, but things fit nicely and I was satisfied with it all.

Joe Hempel’s narration was spot on, as usual, giving the right voice to each character, and transmitting all the emotions from the narration. These books would not be the same without him.

I recommended this series to my boyfriend, since I have been obsessed by them in the last months. He is not into audiobooks, so he went for the Kindle edition, and you know? He finished the nine books during the Christmas holidays! I just hope the last three get released soon as audiobooks. I am impatient to know what is next for Shade and his friends.