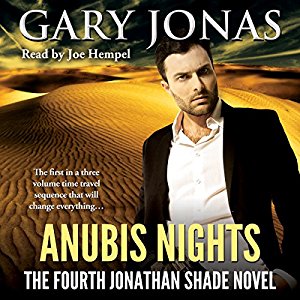 A dead sorcerer in the Underworld named Henry Winslow, a contemporary of Aleister Crowley and former member of The Golden Dawn, steals a spell from The Forbidden Texts in order to fulfill the prophecy of the Thrice Born. He divides himself into three aspects and goes back in time to steal the Emerald Tablets of Thoth from the Great Pyramid of Giza. He wants true immortality and to change the course of history.

Jonathan Shade’s old friend, Sharon, shows up with the master of time, Chronos, to send Jonathan and his team into the past to find and kill Winslow.

Jonathan and Kelly arrive in Egypt during the reign of King Tutankhamun. As they appear from nothing, they are mistaken for gods, but when Tut is murdered during a chariot race, things get out of control.

At stake is, well, everything. Because if Winslow succeeds, the world as we know it will no longer exist, wiped from the sands of time…

Jonathan and his team are approached this time by Sharon and Chronos, the god of Time, to look for Henry Winslow, who has performed the spell of the Thrice Born, and has three aspects of his being scattered in the past with an evil plan to end the world. Jonathan and Kelly will have to go to ancient Egypt in the time of Tutankhamun, Brand and Esther to 1870, and Reina to the roaring 20s.

I kind of expected this book to have a clear end, mostly like the previous books, but although there are three clear story lines, just the one in Egypt is fully developed. As they will need to kill the three Winslow’s aspects in order, this book is just about the first. This is not a negative aspect, it is just that as soon as you finish the book you will want to have the next one at hand as soon as possible.

The story is as fast paced as Jonas has us used to, with fully detailed information and cheeky comments from Jonathan. The characters gain some more depth in this book, and some things will be changed forever before the end is near. After reading the previous three books, I think this one is my favorite so far. It really is a page turner, and once I started it I could not stop listening. The three story lines keep the book going without pause or moment of boredom. Gary Jonas has build a great world and story here.

Apart from the story and the plot being great, with very charismatic characters, Joe Hempel narrating this book is a real pleasure. You will never get bored by a book narrated by him. He does become Shade in these novels, but he is also great at portraying the rest of characters, even when making female voices. I have been into audiobooks for about a year, and Hempel has become one of my favorite narrators, and if you put together a great book like this one and his talent I am not able to say no. What I say is: I really need to listen to the next Jonathan Shade book!