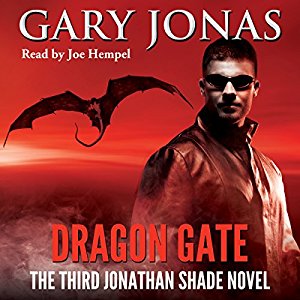 Stephen Noble, a board member of Dragon Gate Industries (DGI), is decapitated. DGI, a front company for wizards, decides to provide executive protection services for Noble's son, Graham, and daughter, Rayna. But Graham doesn't trust wizards and refuses their offer, so DGI hires Jonathan Shade and his team to keep the Noble family safe.

The Nobles are from the other side of the Dragon Gate, and in that dimension, they committed crimes against the Marshall Clan. And now the Clan has come through the Gate to exact their revenge. While Graham and Rayna were too young to have been a part of the death and mayhem in the other land, honor dictates that they must pay for the crimes of their family.

How can Jonathan protect clients who are willing to kneel and accept death at any moment? How can he and his team handle thirteen deadly warriors willing to die to accomplish their goal? And how can Jonathan defeat the deadly creatures the Marshall Clan has brought with them to our world? Creatures that will destroy anything in their path as they hunt their prey.

We are back with Jonathan Shade, private investigator, and hist team: Kelly, Brant and Esther. Graham and Rayna’s parents are decapitated by the Marshalls, and the clan is going for the rest of the family. Jonathan and his team will have not only to protect Graham and Rayna, but find out why and the truth behind it. Graham, Rayna and the Marshalls have something in common: they came from the place beyond the Dragon Gate.

After listening to a very dark second book, this story focus on how Jonathan evolves after having seen his friends die. This new case is an opportunity to overcome his fears and grow.

This time we get also get the story from the point of view of other characters, apart from Jonathan, and the parts narrated by Kelly are very significant. Jonathan’s team is not longer composed by  flat secondary characters. In this book they acquire depth and we see them evolve. The world Gary Jonas has created is becoming richer and one can almost feel part of the team.

Jonas’ fresh style and fluid dialog makes these books a breeze to read. Even though we are facing dark events, Jonathan’s humor and irony will get more than one smile from us.

This book is also narrated by Joe Hempel. I do not know what to say that I had not say before. Jonathan Shade will not be the same without Hempel, and he truly becomes the character and keeps us hooked to the story. He is also good with voices, tones and emotions, and his way of narrating is vivid, motivating and vibrant. Joe Hempel has become one of my favorite narrators ever.

When I started this series I was not sure if it was going to be my cup of tea, but now I just want more, I want to feel part of the Shade team and see where the adventures take us. And I know Hempel will make it unforgettable.