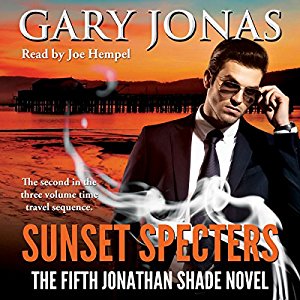 The powerful wizard, Henry Winslow, arrives in 1877 and sets out for the Barbary Coast in San Francisco to steal a bit of life energy from his parents before he can head to the 1920s to complete his immortality ritual.

A FORMER SLAVE WITH A MISSION

Douglas Freeman is a former slave with a growing collection of vengeful ghosts, and he's headed for the Barbary Coast to kill the last few men on his list.

CHAMPIONS OUT OF TIME

Jonathan Shade and Kelly Chan reunite with Brand, the former Sekutar warrior, and Esther, the ghost who has an unbreakable bond with Shade.  They set out for California to stop Winslow.  But the Barbary Coast is a dangerous place where life is cheap. Their paths will cross with thieves, cutthroats, crimps, prostitutes, gangs, magic, and a supernatural threat.  Time is running out on their mission, and one thing is certain--not everyone is going to get out alive.

The Jonathan Shade series so far

After defeating Henry Winslow in ancient Egypt, Jonathan and Kelly are dragged to the year 1877, to join Brand and Esther to kill Winslow’s second aspect. This time Henry Winslow is much stronger than his version in ancient Egypt, and Jonathan realizes that completing the mission seems much harder than what he thought. They will face terrible dangers that will change things forever.

I was a bit surprised that this book is shorter than the previous one. This is the second book in the time travel series, and it is definitely a transition book between the beginning of the story and the resolution. I found it a bit disjointed though. Important things happen in this book but I had the impression that most of the time Jonathan and his team were busy with other things than the real matter. There are secondary characters and secondary stories to the main plot which contribute to how things turn in the end, but I missed more interaction with Henry Winslow, which demonstrated to be a very powerful enemy this time. I felt that there was something missing tying all the secondary stories, and that prevented it to be a solid book.

Although the book is short, there are many heartbreaking moments in it. We will learn important things about the past, and the future will be changed forever. The time lines get a bit confusing with all the changes, but I am impatient to see how everything lines up in the next book, which promises to be decisive.

Joe Hempel’s interpretation was superb! He really becomes Shade and he has differentiated voices and accents for all the characters. This is a great series but Hempel elevates it to a higher level. The story becomes alive when he narrates it.

After the rush I got after the previous book I expected a bit more from this one, or al least a more polished story. This did not stop me from enjoying it all the great moments Jonas has wrote for us, and looking forward to the next book.