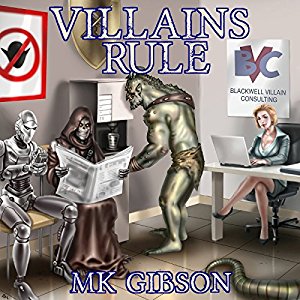 Yes, I am talking to you, the reader of the this book’s description. It’s rude not to answer a person when they ask you a question. OK, I get it, 4th wall breaking is overdone. Get over it. This book, Villains Rule, is a fantasy action-comedy which you have to read. Not because it redefines the genre, far from it. But rather for what it contains. A villain’s tale.

How often do you get to read a story where the villain is the protagonist? No, not an anti-hero, or a brooding monster, nor a hero thinly disguised as a villain. And not evil. If you want evil, take that nonsense to therapy. No, I mean a villain’s villain. The ones who use their power because they can, while morality is only a philosopher’s complex.

This is the story of Jackson Blackwell, the Shadow Master and the top villain adviser. Sadly, even the top villain occasionally gets double-crossed. Trapped in one of the fantasy realms, Jackson has to use his skill and wits to exploit the rules, points out the genre flaws, undermine godly authority, and win the day.

Because, that is what villains should do, shouldn’t they? Read this book, have a few laughs, and find out.

Jason Blackwell, also called the Shadow Master, has a consulting firm for the evil. Villains from several realms go to him for advice. But what happens when the Shadow Master is double-crossed and falls into a trap? Will he need this time to seek help among heroes?

I loved this book from the very beginning. It is written in first person, and Gibson breaks the called 4th wall to engage the reader. It is true that sometimes this doesn’t work, but it does here. In the book there is a mix of intelligent, absurd, and irreverent humor that is absolutely refreshing, and which contains pearls like this one:

Meant to be is the idiotic rederick that results when those who are ignorant of facts try to make sense of random encounters. They cannot understand that there is only one random chance or the machinations of greater minds.

There are many references to fantasy realms and characters, like Hee-Man and Skeletor, and the books of J.R.R. Tolkien. Jackson mentions many unspoken rules in fantasy worlds, and I couldn’t but laugh hard… because they were true! He also explains why he hates elves, and even though I don’t, I couldn’t help but agree with him. There are also some references to Lost and mentions about its end. I think we all know how it went, but if you don’t want spoilers, just don’t read this book.

This is my first book narrated by Jeffrey Kafer, even though I know who he is, and I have to say that I am absolutely impressed with his narration skills. He totally became Jason and gave him a personality. But not only that. There are quite some characters in this book, and several scenes where they all interact, and Kafer delivered a different interpretation for each of them, and they were perfectly distinguishable. This was a good book, but Jeffrey Kafer made it shine.

I would recommend this book to any fan of fantasy, but it needs to be taken with humor. If someone is going to get offended by things like why Jason hates elves, or why some things just work in a specific way in fantasy realms, than stay away. Or not, I think your life will improve by reading this book, because humor is good for you. And go for the audio version, and you will find your next favorite narrator.