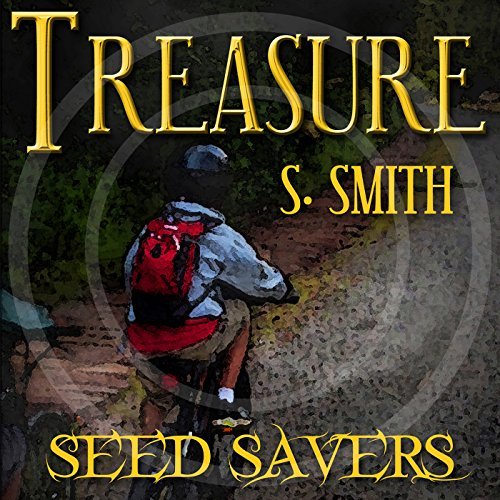 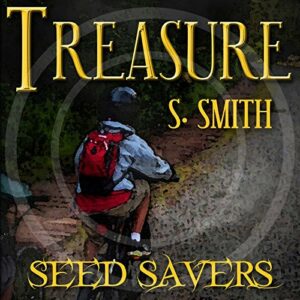 Clare, Dante, and Lily live in a future where growing vegetables is against the law. Some, however, encourage the children to change the future, and instruct them in the old ways.Can the children learn enough before being stopped by GRIM, the government agency controlling the nation's food?And can children really change the future?

Seed Savers:Treasure is book 1 in the Seed Savers Series.

My original https://audiobookreviewer.com/reviews/treasure-seed-savers-book-1-s-smith/ audiobook review and many others can be found at Audiobook Reviewer.

In a world where seeds have become a monopoly, and where real food is a thing of the past, some people are trying to go back to the old ways. But they have to be careful and act in secret, because these actions are illegal, and the big corporations are always alert.

The premises of this dystopian story were really good, especially because it is something that could become a reality at some point. The book is targeted at a young audience, since the main characters are seven and twelve. The story is interesting and I think kids could really enjoy it.

Unfortunately there is little world building, which makes the book a bit flat. We know what people eat, and that big corporations control the seeds market, but there are no more details about the cities or the society. I understand that being this a book for children, Smith didn’t see the need of going into much detail, but I think even young readers like to know the world in which the action occurs. Trains still exist, but we know nothing about buildings, cars, pollution, clothes, gadgets, etc. I think including a little bit more information would have been a cool detail that children would appreciate.

Another big issue I found is that there is quite some religion in this book. The fact that seeds were mentioned in the Bible, and the fact that this is used to teach the children is a good idea, and I don’t mind that. But there is progressively more and more religion in the book. One of the main characters prays in many occasions for things to get better, and it is also mentioned that things happen for some reason. I just hate indoctrination, and while I respect religious people, I disagree about many things. Praying doesn’t make things to happen, acting does; and sometimes things just don’t happen. Also, affirming that things happen for a reason can help some people to cope with events, but this doesn’t make it more real, and I think it’s important for children to know this. Growing is about assuming responsibilities, not thinking that something bigger will save you if you pray very hard.

It surprised me a bit that there was not a lot about the health benefits of eating real food. If there is something in me believing that the situation in this book will not happen is the increasing amount of people trying to eat healthy to avoid illness. Unfortunately there are nowadays a lot of ailments, many of them immune disorders, resulting of a poor diet and especially processed foods. This is one of the key factors for which I think we will resist and not fall into the destiny described in this book.

Julia Farmer delivered a good narration, putting the right amount of emotion and expression when interpreting the characters. Her children’s voices were great. The only drawback is that sometimes both siblings sounded the same, which was a bit confusing.

It was an okay book, but I would only recommend it to children in religious families. There is just too much religion for other audiences.