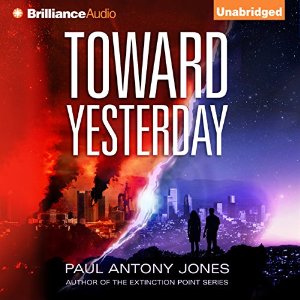 My original Toward Yesterday audiobook review and many others can be found at Audiobook Reviewer.

In the year 2042 an scientific experiment involving tachyons goes wrong and that makes the world go back in time 25 years. This means that everyone who was alive at the moment of the slip, will return to 25 years in the past and 25 years younger, and the ones who had died will be alive again at the age they were at 2017. But there is chaos all around, caused by numerous accidents which happened due to the slip. Is this a second chance for many people or are they doomed to live things again and again?

The idea for this book is excellent in my opinion, but I had troubles with the execution. First, several unconnected characters were presented before the slip. This is something often used in thrillers by presenting parallel stories, creating a very dynamic narrative, but this time I felt lost in meaningless details. The first part is quite slow, and all along the book the characters are one-dymensional, which made me not to care a lot for them. I must also add that the characters and their actions did not feel real or believable, but that could also be a result of them being flat. I do not want to give away details to avoid spoilers but this happens many times along the book.

There are a couple of secondary plots that were quite predictable, and a bit forced.

I understand that science-fiction does not need to involve real science (but it is so good when it does!), but this felt too much pseudoscience for me, and the resolution had a great part of deus ex machina mixed with some spiritual consolation. I usually dislike this in a science-fiction book. It makes me think that the author took the easy way out instead of doing their homework.

The book feels in a way a second chance for many of the characters, tinged with some spiritual connotations that could have been left out, in my humble opinion.

Alexander Cendese did a decent narration, even if I am not fond of the general tone and a couple forced voices. The diction was clear and the audio production had no issues.

All in all, it was an entertaining listen, and if you are into science-fiction and don’t mind if science is not too rigorous, you will enjoy this book.