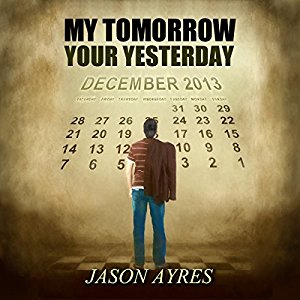 My original My Tomorrow Your Yesterday audiobook review and many others can be found at Audiobook Reviewer.

Thomas Scott is on his deathbed. He has lost his memory but finds out that the woman beside his bed is his daughter. Soon after, he dies. He wakes up the next day finding that he feels better than the previous day, still with memory loss but knowing his daughter. Soon Thomas will discover that time is running backwards for him, and that his tomorrow is in fact the yesterday of everyone else. He will have to adapt and try to learn about his life to be able to cope with it and maybe try to fix many things that went wrong during the years.

I loved the concept of this novel. At the beginning I thought it was going to similar to the movie Memento, but in this case we have as much information as our main character. I was intrigued about his life as much as him, and also whether the future could be altered by different decisions.

There were attitudes which I disliked from Thomas, but I guess everybody would have done the same in his place. One tends to be a bit creepy when one has more information than the rest, and probably he thought he was just telling white lies. The end justified the means for Thomas Scott, and his goal was to keep his life and his family.

I think this book was an excellent exercise about questioning decisions in life, and who would not want to be able to fix previous mistakes having all the information at hand? It is anyway a very dangerous game, and while he is playing he will not know if he will get his reward.

Jason Ayres has succeeded to transmit the sense of loss Thomas feels again and again in this story, and how feelings are reversed for him due to time flowing backwards. This is a completely different time travel, but it is time travel indeed, and Ayres has gotten to make it believable and close to us.

This is a book you have to pay attention to while listening to or reading, since it is easy to get confused with ‘before’ and ‘after’ (and other time references), since these words are usually used from Thomas’ point of view.

The narration was very clearly done, and I enjoyed the different accents portrayed in the book. Paul Messingham did a very good job narrating this book.

I found this book to be very enjoyable, and I would strongly recommend it to  everybody. After all, you do not see an original idea like this one and also well executed very often. I will be reading more of Jason Ayre and I hope his other novels are released in audio format soon.