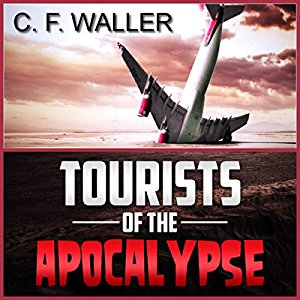 The book starts in a future society, a legless woman sabotaging the company that she is working for, and then waiting for somebody to arrive. Back in the present, we witness how a strange crew arrives to the cul-de-sac where Dylan and his mother live, helping them in ways which nobody will expect from a stranger. Some years later an EMP leaves Earth without electricity, and Dylan discovers that this strange crew knows a lot more than anyone should.

It took me some time to get into the story. The opening act felt weird, and then things shifted quickly. From that moment onwards it went smoothly. Waller did a good job building up and keeping the intrigue, just slowly revealing parts of the truth. I really enjoy when there is a mystery behind and we do not get the whole truth almost until the end. It is also very well written.

The characters were well developed and had differentiated personalities. They felt almost real, although there were some reactions that I did not completely understand, especially Dylan’s relationship with his mother and his reactions towards her. It felt somehow off.

Despite how well written the story is and the amazing premises, there were a couple of details that did not completely convince me, like Dylan’s reaction to what happened to his mother, and the final goal of the mentioned crew. It is never completely explained, and the little we get does not make a lot of sense. It is also not explained what happens with all the fail-safes when they get back. I think more development was needed there since it feels like the weakest part of the story.

J. Scott Bennett did a wonderful job narrating this book, and he delivered male and female voices with efficiency. He took and transmitted all the emotions and nuances to the story. It is my second book narrated by him, and I can totally vouch for him.

All in all it was a very good listen, and despite the minot complaints I have, I really enjoyed it. Just fixing those little things would have made it a five star book.