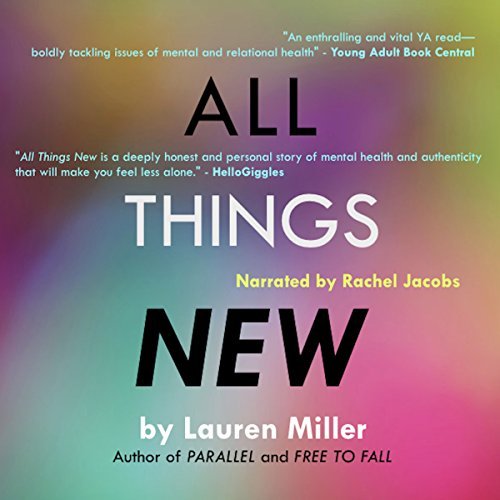 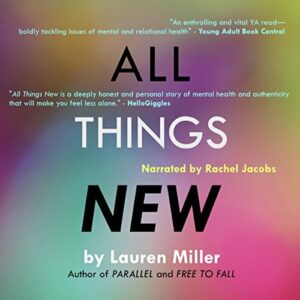 Jessa has always felt broken inside, but she’s gotten very good at hiding it. No one at school knows about the panic attacks, the therapy that didn't help, the meds that haven’t worked. But when a severe accident leaves her with a brain injury and visible scars, Jessa’s efforts to convince the world that she’s okay finally crumble—now she looks as shattered as she feels.

Fleeing from her old life in Los Angeles, Jessa moves to Colorado to live with her dad, where she meets Marshall, a boy whose kindness and generous heart slowly draw Jessa out of her walled-off shell and into the broken, beautiful, real world—a place where souls get hurt just as badly as bodies, and we all need each other to heal.

ALL THINGS NEW is a love story about perception and truth, physical and emotional pain, and the messy, complicated people we are behind the masks we put on for the world, perfect for fans of ALL THE BRIGHT PLACES and THE FAULT IN OUR STARS.

Jessa was a normal girl until she turned fifteen. Her parents’ divorce triggered on her anxiety and numerous panic attacks, making her a loner and a specialist in hiding her true feelings. Two years later she had a car accident which caused aphantasia, a rare condition which implies mind’s eye blindness. Jessa starts a new life, moves with her father to a different state, and struggles with the consequences of her accident, which go further than aphantasia.

I loved this book. It is written in first person, from Jessa’s point of view. It is amazing how rich this character is, with so many complex emotions and thoughts. Jessa has lots pof issues, but I could often relate to what she was feeling and I could completely understand why she acted how she did. Some people may think some of her reactions were a bit extreme, but any introverted woman will see herself in Jessa at that age: second guessing everything and trying to hide any vulnerabilities at all costs. Jessa is troubled, she is afraid, but she has a reason for his insecurities. There is a great evolution in her, caused by what she had to live with her new friends. I love when we witness a character grow, and this is one of those precious cases.

I felt moved several times throughout the story, being nearly in tears in a couple of occasions. This is one of those books that makes you think, and realize that there is value in each one of us, even in people in which we didn’t expect it.

This is a story about personal growth and overcoming our own’s fears. It’s a good YA book but I would recommend it to anyone who still remembers her awkward young years.

Why did I give it just 4 stars, instead of 5? There is some religion involved towards the end of the book that I didn’t expect. I think the story would be much more universal without this tiny detail. Using religion to explain things just doesn’t work with many people, including me.

Rachel Jacobs delivered a really emotive narration. The book is very well written, but Jacobs’s narration enhanced the book in a way that I felt I was listening to Jessa. Rachel Jacobs transmitted Jessa’s emotions like if we were listening to the real character. She really brought Jessa and the other characters to life with her interpretation. The only drawback I can mention is that there are several audio edits throughout the book, and they are clearly noticeable, they sound a bit more flat and with a bit more reverb than the rest. I guess those were modifications requested by the author, but it is just a pity that they are so noticeable.