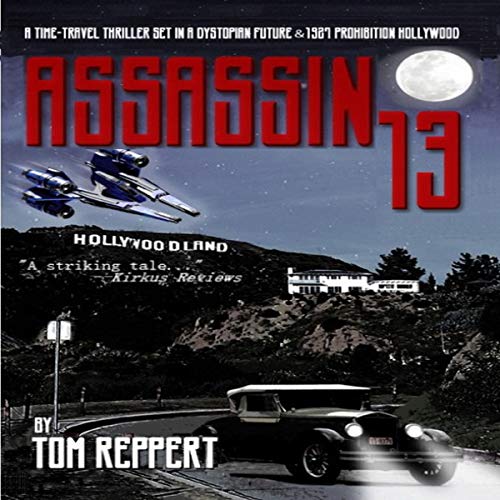 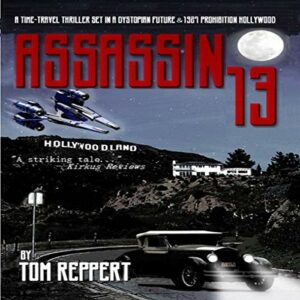 Lauren Ramirez, an Assassin 13, which means she's the best at her profession, is betrayed by her employer, the President of the United States, when she takes a high-rank target job to get information on her mother’s killer. While she's attempting to escape in a space shuttle from his trap, she hurtles through a time displacement anomaly and lands in the glam of 1927 Hollywood.
Lauren finds herself working for one of Hollywood's top actresses, Pauline Windsor, who is dating mafia member Benny Sorrentino. He is caught up in a gangland war with the Colombini brothers for the city's profitable bootlegging and gambling rings. Even as she clings to the revenge for her mother’s death and somehow fixing her broken shuttle to return for the information, Lauren's relationship with the people she meets, stunt pilot Remy Garnett, Pauline, and Pauline's children, all begin to change the hard surface of her heart.
When Pauline's relationship with Sorrentino draws her and her family into the gangland war, Lauren must decide whether to use her 22nd century talents and technology in their defense or abandon them to slip back into her time and get the information she needs to avenge her mother.
Preorder on Amazon today, or grab a FREE kindle copy March 16-20!

Lauren Ramirez “Malinche” is a professional assassin hired in the 22nd century, but her goal in life is finding her mother’s killers. She steals a shuttle during one of her missions and, by accident, she is transported to 1927, where she meets Pauline Windsor, a well-known film star who is in a relationship with a mafia gangster. Until Lauren can find a way to get back to her time, Pauline becomes her host and protegee. Lauren will use her skills to keep Pauline and her children safe from the crime lords.

This was an action-packed book with a sassy and resourceful main female character. It was not only a book about a woman from the future stranded among gangsters during the prohibition era, but also about the cinema of the time. Real and fictitious characters mingle in the book, and we are witness to famous events like the release of the first sound movie. There were some very interesting pieces of information that will delight any cinema aficionado.

I enjoyed the story and found the second half quite gripping, but I had the impression that too many different things were packed in it. Lauren was a strong main character but she was also not likable enough to me. Her main fuel was revenge, a feeling I always have trouble relating to, especially if I don’t feel sympathy for the character feeling it. The character development was a bit lacking, which didn’t help with this. I had the feeling that a different backstory would have been more effective. A professional assassin coming out of a circus? As much as I wanted to believe in this idea, I just couldn’t. It seems Malinche never lost a fight, but it’s nowhere mentioned whether she had special training or extraordinary strength. There’s also a big uncovered gap between her childhood at the circus and her hired assassin phase. Somehow the exposition felt a bit too long, fetched, and disconnected from the rest of the book. There’s also an episode in between both parts where she meets again one of the characters from the circus. I’m not sure why this happened, probably to show Lauren’s evolution, but it felt a bit forced. The AI’s presence in the story was a nice addition but it felt a bit like an afterthought. The first part of the book felt a bit disjointed, but the second part was gripping. I think this book would have benefited from being edited.

As a side note, I wanted to mention that in the first part I also observed a sexualization of female characters that didn’t sit very well with me. I didn’t see the point of mentioning Sybil’s thong while they were escaping in the shuttle. It was maybe aimed at a different kind of reader. Again, I think the book would need some extra polish to make it more consistent.

Patricia Santomasso delivered a great narration with expressive character interpretations, and different accents and voices. The only small complaint I have is that the AI’s voice should have sounded a bit more different than Lauren’s. As it was, it made following some of their conversations a bit difficult. As it was a male AI, I think its voice should have sounded somewhat male, which Santomasso didn’t have issues with, as male characters sounded believable. I’m glad to observe that Santomasso did a great job pronouncing Spanish words, something that doesn’t often happen.