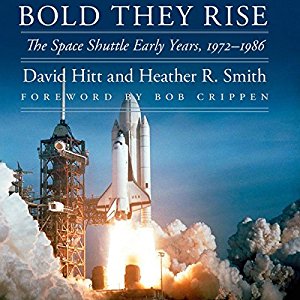 I have received a copy of this book in audio format by the narrator in exchange for an honest review.

This book narrates the first years of the Space Shuttle program from the point of view of the astronauts.

The program was launched by Nixon wanting to have a different approach to traveling to space, more on a budget and with reusable space crafts. One of the program’s goals was to have quite an amount of missions per year, which would reduce the per-mission cost. In the end this cost was not reduced as much as it was expected due to parts that could not be reused. Primarily the space shuttle missions were related to satellite launching and investigation in zero G, but then the intention was making it accessible to people not related to the program. The last part of the book is dedicated to the Challenger, what caused the accident, and how this changed the vision of the shuttle program. The missions were maybe overlooked and lightly taken, and from then onwards things needed to be taken more strictly to avoid future disasters. The story continues in ‘Wheels Stop: The Tragedies and Triumphs of the Space Shuttle Program, 1986-2011’, which also promises to be an interesting read.

This is quite a long book, over thirteen hours, but it is really amazing. I knew about the shuttle program but I ignored some of the historical details. Here they are all compiled in a nice format that will delight everybody. The book is full of anecdotes told by the astronauts and technicians. There is a little of tech babble but not too much, making it accessible to everybody. I think it would be useful to take a look at some pictures during the technical descriptions, just to have an idea about what goes where, but it is not strictly necessary.

Gary L. Willprecht made an amazing job narrating this book, slightly changing voices when delivering someone’s speech. It was like watching a documentary, and despite the great length of the book and the hundreds of details, Willprecht was able to hold my attention from beginning to end.

This book was a great listen, and I would recommend it to anyone who is a bit curious about NASA and their projects. I will definitely want to listen to other books of this series.