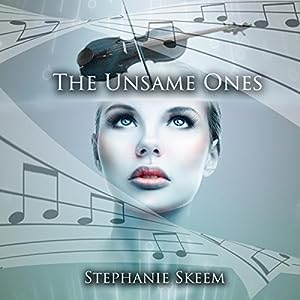 My original The Unsame Ones audiobook review and many others can be found at Audiobook Reviewer.

There are different people in this society, twelve to be exact. Depending on the month they are born they have a different set of skills and a certain job. Januaries are secretaries, Marches are cops. Novembers and Decembers are at the top of the hierarchy, and they are also who live the longest. Because the same ones have an expire date, each type with a different congenital defect that will kill them when the time comes. Everything is designed to have a perfect society, and this is why they chase and kill the unsame ones, which are believed to carry the unsame virus, a potential danger for the society of sames.

The main character in this book is a seventeen year old January, and this means that this will be the last year of her life. One day she suddenly meets an unsame one who gives her a violin asking her to promise him to keep it safe. She will face then new situations and will have new thoughts that will change the course of her normal life.

The premises of this story were really good but the execution failed at several levels. The book is 14 hours long but with the poor development and depth it has I just see material for a short story. The length comes from the repetitions and reiterations all along the book, I guess to set the mood and make us see the world through this  January’s eyes.

There are a couple of twist to the plot, but they were not totally unexpected. The interaction with the Decembers and how one of them reveals what they use the unsame ones’ blood for were quite forced. The descriptions failed for me since everything was just grey, but it was difficult to imagine January’s surroundings. I expected to learn a bit more about how the society worked, how it was formed and its origins. It is like the writer presented a skeleton but failed at showing the muscles and how the body moves. I guess we should take this book just as a dystopian experiment to make us reflect about life and decisions. It felt odd how nobody noticed how differently this January behaved and the fact that she visited unexpected places. I expected this society to be a version of the Big Brother, where everything out of the normal is quickly denounced, but everything goes unnoticed until the end. One would wonder how this society did not fail before.

The end was more fantasy or magic than science fiction, and in spite of its beauty, I found it a bit disappointing.

I could not understand January’s attitude towards the end of the book. This made me disconnect from her as a character, and made the story even less realistic.

The book is narrated by the Stephanie Skeem herself. Her diction was very clear, and the voices were good enough to identify the subject. She put a lot of passion into the dialogs and made the book an easy listen. Due to this  and the constant repetitions, I was able to listen to the book a bit faster than usual. I normally listen at 1.2 – 1.4 and here I was comfortable at 1.6 – 1.8, and even like that some parts felt slow. I guess it was due to the reiterations and the very little useful information.

I enjoyed this book, and found it an interesting dystopian experiment. I just wish it was properly edited before its publication, since some hours should have been trimmed off. The author has a lot of potential, and I hope she continues writing.