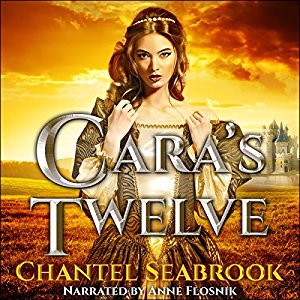 The reign of Elbia, composed by twelve provinces, is reigned by a despotic queen, who oppresses her people with very high taxes. Cara lives in one of the poorest provinces, and she does not see eye to eye with the queen nor believes in the goddess Annul. One day she receives communication that her cousin Maeve, princes and heiress to the throne, has been found barren and therefore rejected as future queen; and so the crown will fall then upon Cara, being her the next in the dynastic lineage. She will have twelve consorts, one from each province, and they all together will have to travel to the twelve provinces on a tour that will last for two years, performing in each place a traditional rite which will change Cara’s vision of things. From these twelve consorts, Cara will have to chose the future king of Elbia, but some are not what they seem, and treason will appear before she realizes.

Before starting this review, let me tell you that I am very picky about epic fantasy. There is The Lord of the Rings and many books that copy or try to aspire to the same level but fail. This is not one of these books. Cara’s Twelve is a powerful story where the roles seem to be inverted compared to other epic fantasy books. We have a courageous heroin surrounded by twelve men. She starts the book as a strong but innocent girl and evolves into a powerful woman, with clear ideas and a strong character, whose main mission will be to bring justice back to Elbia. Some of the men will try to force her to submit to them but she will not let them. The story caught me from the start and it kept my attention all the way.

At first I had a bit of trouble with the twelve consorts, so I recommend here to write down their names just for future reference. Despite the high number, Seabrook does a wonderful job describing them and giving each one a distinctive personality. Some will matter more than others off course, and in the end Cara’s decision will be a hard one, and let me tell you, that I suffered about it. I have mixed feelings about what she decided, but it was the best according to the information she had at the moment.

I usually avoid romantic novels, and romance is often used just to please a certain subset of readers, in which I am not included. In this case though I think it is just something adding depth to the story. Seabrook knows how to write characters, feelings and romance! And this comes from somebody who usually does not enjoy romance in a book!

There are several explicit sex scenes in the book. I was not bothered by them and I think they help to understand the changes in Cara’s life. I just wanted to warn about this since some people could be sensitive to it.

I ignore if the eBook or the physical edition include a map, but I think it would have been a nice addition. It is not really essential but who does not like maps? Especially if the characters spend the whole book traveling.

Anne Flosnik narration was exquisite. She transported me to the reign of Elbia and impersonated each one of the characters. It is clear that she had some issues making all the twelve consorts voices different but it is completely understandable. For the rest, she transmitted the characters emotions in a very powerful way. I will definitely want to listen to more books narrated by Flosnik.

This book as been a nice discovery. As I have said, sometimes I avoid epic fantasy because it usually does not live up to the classics, but this one really deserves to be on the list of the best epic fantasy books.