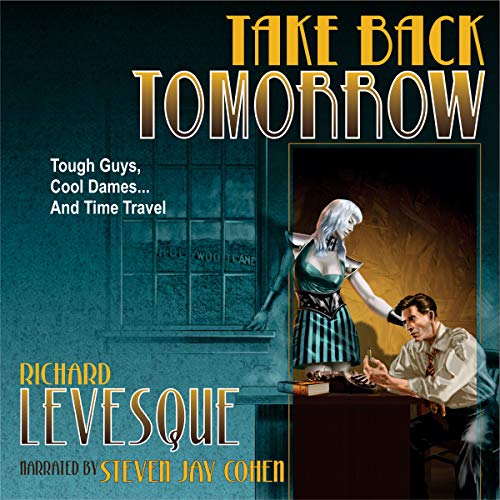 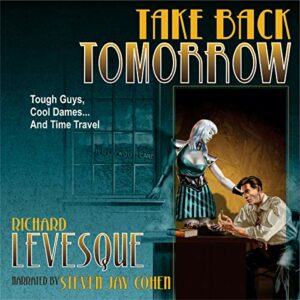 “Raymond Chandler meets Robert Heinlein in this fun and inventive crossover SF novel from Richard Levesque.”—J. Orr, Amazon Reviews
What if all you had to do to make your dreams come true was violate the laws of the universe?
That’s not just a philosophical question Eddie Royce has to answer. It’s a choice he has to make when the most famous science fiction writer of the 1930s goes missing and his unscrupulous publisher becomes convinced that Eddie knows all of the older writer’s secrets—not just the secret of where he’s gone, but the secret of how he’s traveled in time.
Until now, Eddie’s fooled himself into thinking he’s got the system figured out, “borrowing” plots from Shakespeare and rewriting them as space operas to make a name for himself in the pulps. But when he finds out that Chester Blackwood—his idol and inspiration—has been cheating the system in ways Eddie could never have dreamed of, the hack science fiction writer finds himself in the middle of a plot that his pulp readers would never have imagined.
Now he has to do all he can to save himself—and Blackwood’s beautiful daughter—from the powerful figures who all want Blackwood’s secret. And violating the laws of the universe might just be the least of Eddie’s problems.
“The pace of the story is quick, and the time transitions are handled well. Overall, this is a good novel, one that even readers with little interest in sci-fi might enjoy.” — Publishers Weekly.*
“Hardboiled 30′s crime thriller meets time-traveling pulp science-fiction for an original fast paced, page turner.”—S. Sager, Amazon Reviews
“It has a distinctly ‘noir’ flavor as well as an old school science fiction feel. It is fast paced and clever.”—C. Pellitteri, Amazon Reviews
“Apart from stopping to have something to eat I haven’t been able to tear myself away from this until I had finished it. This is good old time story telling that is well written, and definitely well worth reading.”—M. Bowden, Amazon UK Hall of Fame Reviewer
*This review was of the manuscript version submitted to Amazon’s Breakout Novel Awards competition in 2012.

Most of Levesque’s book production is cyberpunk, but he is also into pulp, noir, and time-travel, and this is the second audiobook I listen to about these subjects (the other one was Foundlings). Set in the late 30s, this story deals with time travel and the consequences of altering the history, changing train tracks, as Levesque has described it. Eddie Royce is a science-fiction writer without much talent to create new stories, but he gets to make a living at adapting old classics to science-fiction. Feeling guilty about plagiarism, his sin becomes smaller when he meets one of the greatest science-fiction writers of his time, who tells Eddie about his traves in time to steal great science-fiction masterpieces and getting them published under his name ahead of time.

I found this story entertaining and deliciously complex. Time travel stories are like a jigsaw puzzle in which the pieces end up falling into place. The fact of several realities or timelines is explored in this book, even though there is nothing new in it that we had not seen before. The descriptions in the book are rich and detailed, and it is almost possible to feel the noir atmosphere. This book is about science-fiction stories and the love for them, but the book itself could be classified more under Fantasy and Time Travel, as there is not much science nor pseudo-science it in.

Richard Levesque tells great stories, but something I see in most of his books is little character development. The main characters are in general likable people, with some flaws in an attempt to make them more real, but they just feel flat to me. There are several changes of point of view in this book, being most events told from Eddie’s point of view, but also some from Roxanne. The first switch felt a bit strange to me, but we got them more often in the second half of the book, and at some point, it stopped feeling weird. I think it more or less worked because neither Eddie nor Roxanne were very developed as characters. Sadly, I could not relate to them, and I think this is part of why I did not fully connect to the story.

The first half of the book dragged a bit, and there is actually not time travel until more or less halfway into the story. It is where we got information and character background but this did not help to bring the characters to life enough for me to care for them.

All in all, I enjoyed this audiobook, being the setting and the time travel aspect, the main top points for me.

Steven Jay Cohen did a fantastic job narrating this story, and voicing not only Eddie and Roxanne, but also the rest of characters, with expressive interpretations and subtle changes in voice and style for every character. It definitely added something to the story. I see that this book was published four years ago, and Cohen’s last audiobook productions feel a bit more polished and professional. The only thing that bothered me a bit was some slight mouth noises at a couple of points in the audiobook.