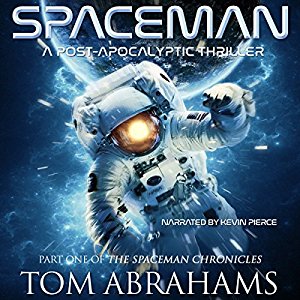 My original SpaceMan audiobook review and many others can be found at Audiobook Reviewer.

A solar CME (coronal mass ejection) leaves Earth and the ISS without electricity. Clayton Shepard is an astronaut on his first mission on the ISS, and he will have to find a way to rescue his two colleagues who were on an EVA at the moment of the CME, and try to get back to Earth before life support fails completely. On Earth his wife Jackie will suffer the consequences on a different level but not less stressful, taking care of their daughter and part of the neighborhood, while their son is on a camping trip with a friend.

The premises of this book were so good, and the blurb mentions that some Nasa team members collaborated on this, that I was ready for a hard sci-fi book. The parts at the ISS were a bit, but I found them a bit confusing, like they were somehow not very well described. I had problems to visualize what Clayton was doing and the space he was in. Even though the book is titled ‘Spaceman’ most of the action happens on Earth, where we see the rest of members of his family facing a post-apocalyptic world in which almost everybody has become selfish and cruel. The ISS part was a bit original, but not the part on Earth; we found the same stereotypes than in many other books. Nevertheless I found that the riots started too early, while at the same time some people were still working at gas station stores. It just did not make a lot of sense.

The action in the book is quite slow, and the several flashbacks, instead of helping us to know the characters better, make the story drag. I was not able to connect to any of the characters, and Abrahams failed at transmitting their emotions and Clayton’s sense of urgency at the ISS. I found myself not really caring for any of them, which bothered me, since the setup was really great.

I have read comparisons between this book and the Martian, and even Clayton mentions Matt Damon during his ramblings while fighting for his life, but I would not put both books at the same level. As I have just said, I did not get the sense of urgency, nor could I connect to any of the characters. I just wanted to laugh at Clayton’s sense of humor but couldn’t.

And in the end I felt cheated. Clayton’s story, the one giving the title to the book, is just a small part of it, and it is not even finished. I understand that this will be a series, but the end was quite underwhelming.

Kevin Pierce’s narrations was spot on, though, and he tried to transmit the characters emotions, even though they were not clear in the text. I am looking forward to other books narrated by Pierce.

I have found this book basically anecdotal. The fact that part of it happens on the ISS makes it more interesting, but the rest of the material did not live up to my expectations. Just another post-apocalyptic story.