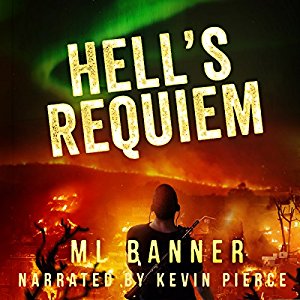 His son died, and his wife left him.

Then the world ended.

It was about to get much worse.

Tom was already prepared for society’s collapse when the nonstop solar storms arrived. He just hadn’t planned on the loneliness, and those never-ending memories.

When a woman and a little boy show up, they bring with them much more than Tom had bargained for. He’ll not only have to battle for his life; he’ll need to fight for a reason to live, as he recalls the painful memories and the songs linked to them in
Hell’s Requiem

When the end of the world came, Tom was already prepared. He had moved with his family to a house in a remote area and had everything ready. But bad luck got in the way, and their son got killed while shoot practicing with Tom. His wife blamed him and left. Some time after the EMP that triggered the end of the world, Tom receives the visit of some strange people. Although suspicious at first, he lets them in, but he maybe should have been more cautious.

The structure of this story is quite original, every chapter starting with a song from a post apocalyptic playing list. It really helped to set the mood and I have to say that most of the songs are quite well known.

What I had issues with were the characters. None of them was very likable. Tom decided to move to a remote area without the real consent of his wife, she was resentful all the time, and finally abandoned him after their kid’s death. I also did not understand very well their motivations and actions: One of the members of the group visiting Tom’s place is a woman, and despite feeling in his gut that he should not trust them, not only he does but also watches her while she takes a shower (and she knows that he is watching). Another example is Tom threatening his wife’s lover instead of facing her. All this part did not make a lot of sense, and it prevented me from connecting to the characters.

The ending helped to make things fall in place, but that did not make me like the characters better than before. It was a clever story but something in its execution did not work for me.

There are several flashbacks in the book, and I found strange that all but one contain relative time references. I did not understand why just in one occasion Banner used an absolute time reference (2004).

Kevin Pierce’s narration was very good,delivering great character interpretations and exhibiting an ample range of voices. I had issues with his British accent though, but for the rest it was a superb narration.

It was an okay book, but not my favorite within the genre. The great narration helped to enjoy it.