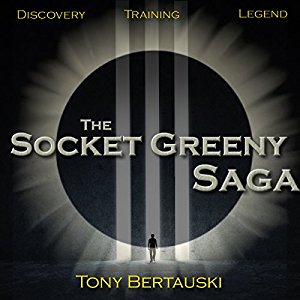 The entire Socket Greeny trilogy (Discovery, Training, and Legend) follows a white-haired teenager that discovers he's part of an evolved human race, how he trains to understand his true self, and the legendary conclusion of his true nature.

Socket discovers that he is different to the other kids. When in Virtual Mode he sees and can do things that his friends cannot. His mother explains him that he is special, and that his place is in the Paladin Nation, where other people with special abilities train to defend the world from a very dangerous enemy.

Last year I had the honor to review the ‘Halfskin Boxed set’ and I absolutely loved it. It reminds me of classic dystopian books but completely modernized. What is not to love? So when I got the chance to review ‘The Socket Greeny’ saga I did not think it twice.

Bertauski writes science-fiction, but the good kind that makes you think and keeps you awake at night. His characters are fully fleshed and they evolve significantly in the three books, which really helps the reader to connect to them, even though the problems they have are so different from ours that this is a difficult task, but Bertauski does it!

The main conflict reminds me of the one present in ‘Halfskin’ but with a twist. It was interesting to explore this once again from a different point of view.

When listening to the first and second book there was something that failed to make the books complete to me. The issue with the duplicates was an interesting one, but since their origin was kind of obscure, it was difficult to relate to the Paladins. At that moment the duplicates were a kind of faceless enemy but without a lot of substance. There was something missing. But Bertauski’s books cannot be read as standalone. Each one of them is part of a meticulously written plan, and everything falls in place in the end. The questions I had, the things that did not convince me, were answered in the third book. So my advice is this: if you have the chance, get the complete saga and read it from beginning to end. Everything will make sense in the end.

The total length is more than 22 hours, but I was so immersed in the story that it took me four days to listen to the three books, and when I had finished them it left me with a lonely feeling, already missing Socket and his friends. As I have said, this is one of those books that makes you think and will have you busy mulling over it after some time. I spent over one hour awake in be around 5 am just unable to take my mind off this story.

The books are narrated this time by Tony Bertauski himself. I am not sure about this move though. I remember greatly enjoying the narration of ‘Halfskin’, but I had more issues with this one. While Bertauski’s narration is mostly correct and his characters’ interpretation is quite good, I missed some more voice range. He made the effort of giving a different voice to Spindle, but all the other characters sounded the same, even female characters. This rendered things a bit confusing at times. I also noticed a couple of sentence repetitions and numerous volume variations. This can sometimes be fixed by normalizing the track but I am not sure if it was somehow more evident on the original. At times I could hear Bertauski swallowing and even wheezing, probably caused but being to close to the microphone. All in all, the narration was okay, but I think it is a pity to have a just okay narration for a master piece like this. I believe in hiring professionals to have professional results, and a good narration always makes an audiobook shine.

I am happy that I took the time to listen to this audiobook, and I plan to read more by Tony Bertauski. He is one of my favorite authors nowadays!

I received a copy of this book in audio format from the author and narrator in exchange for an honest review.