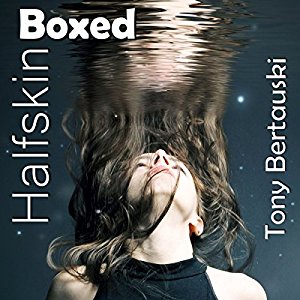 HALFSKIN (#1) Biomites are artificial stem cells that can replace any cell in your body. No more kidney failure, no severed spines or blood disease. No cancer. Pharmaceuticals become obsolete. With each dose of biomites, we become stronger, we become smarter and prettier.

At what point are we no longer human?

Nix Richards nearly died in a car accident when he was young. Biomites saved his life. Ten years later, he’s not so lucky. The Halfskin Laws decree a human composed of 50% biomites is no longer human. Halfskins have no legal rights and will have their biomites shutdown. It’s not called murder, merely deactivation.

Cali Richards has been Nix’s legal guardian since their parents died. She has lost far too many people in her life to let the government take Nix. She is a nanobiometric engineer and will discover how to hide him. But even brilliance can succumb to the pressure of suffering. And technology can’t cure insanity.

Cali and Nix keep a slippery grip on reality as they elude a maniacal federal agent dedicated to saving humanity from what he calls 'The Biomite Plague'.

Her life has become dull and pointless. If she had more biomites—synthetic stem cells that promise hope—she could take control of her life. But Jamie’s body is already 49.9% biomites. The rest is clay—her God-given organic cells. Any more biomites and she becomes a halfskin. And halfskins are shutdown.

But there is a way.

Black market biomites, called nixes, can’t be detected by the government’s halfskin hunter, M0ther. Jamie would have to sacrifice her clay to get the nixes, but they would make her halfskin without anyone knowing. Including M0ther. But first she has to find them.

Nix Richards can help. He’s the first halfskin to escape M0ther and Jamie has something he wants. He’ll need her to help him find a fabricator. He’ll betray anyone to get it, even those closest to him.

This psychological thriller will keep Nix and Jamie second-guessing every move while they elude M0ther and Marcus Anderson, the man that wants to rid the world of biomites. But in the end, they’ll all discover just how deep the betrayal goes.

BRICKS (#3) Fabbers, slabbers and fakies were dehumanizing slurs for fabricated humans. Bricks, however, was the People’s favorite.

The Sentience Laws were created to protect the rights of Bricks, but the laws didn’t last long. Banished to the remote isolation of the Settlement, Paul and Raine are sentenced to live the rest of their lives in the wilderness.

Escape and freedom will depend on Marcus Anderson, the man responsible for all the suffering that’s been endured since the invention of biomites—the synthetic stem cells used to fabricate halfskins and Bricks. Marcus needs them in order to find the “powers-that-be,” the man he believes is truly responsible for the world’s suffering. Their journey will take them to a tiny island in the South Atlantic, where the truth is much closer than they realize. That’s where they will discover the “powers-that-be”.

And so much more.

I have received a copy of these books in audio format from the narrator in exchange for an honest review.

The story is set in the near future. Mankind has invented biomites, a kind of synthetic stem cells in order to cure diseases, save lives and even improve one’s appearance. In the beginning a person had to be at least 12 years old to get seeded (getting biomites implanted) but Nix got them when he was 8 after a terrible car accident where his parents died. Biomites seem like the answer to many problems, but there is a catch, like cancer cells they reproduce without control, and the Halfskin Laws do not consider people human beings when their total biomites reach 50% of their body. When this happens, their biomites are shut down, and consequently, the ‘Halfskin’ person dies.

Marcus Anderson is the person in charge to enforce these Halfskin Laws, and he witnesses every shutdown in the country, convinced that he is doing the right thing since the human body is a God’s present and substituting its parts is just pure abomination.

In the first book, Cali, Nix’s big sister and a nanobiometric engineer, will try to save Nix’s life. He is just a teenager, but has reached halfskin status and Marcus will shut him down.

The second book is titled Clay, and this is the given name to the part of the body that is not substituted by biomites. Here ‘briks’ will be introduced in the story. Briks are fabricated humans, 100% made by biomites. Initially all bricks were agents working for Mother, but later on some people start fabricating bricks illegally. There will be transcendent questions about the morality of fabricating a brick and whether a brick will feel different to a human been.

I loved book one, but I think book two was my favorite. There was a clear evolution in the characters and the new ones were very interesting and complex. Their relationships and conversations were fluid and credible, and I felt that I knew them.

There were a couple of very good twists in both books which made them even greater. The only thing I did not quite get was the dream land and its importance. Its introduction in book one felt a bit artificial but I suspected that something so atypical would be of importance later.

And it was, mostly in book three. This book is titled Bricks, and it is mainly about the life of all those bricks that were illegally fabricated. The topic was good but the execution was not as good as in the previous two books.  The story is well written but the second half feels very long and slow. There is a big twist that could be more or less expected, which did not make a lot of sense to me. It could be because I was not very keen on the dream world idea. I am also aware of how difficult is to give a satisfactory end to a very good series.

All in all, it is an extraordinary trilogy which deserves to be read by any sci-fiction/technothriller fan.

All three books are narrated by David Dietz. It took me some minutes to get used to his voice but then I really enjoyed the narration. He is really good at making voices and keeping them consistent all along the three books. I could know who was talking at any moment and he made a fantastic impersonation of Marcus Anderson. At some point I stopped thinking of a narrator making voices and thinking of different people living the story. The story was very good, but David Dietz made it superb.