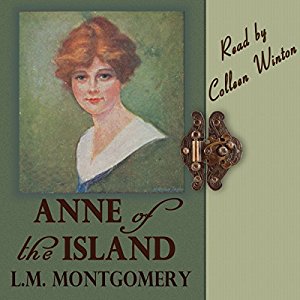 Anne of the Island was published in 1915, seven years after the best-selling Anne of Green Gables, partly because of the continuing clamor for more Anne from her fans – a fan base that continues to grow today!

In this continuation of the story of Anne Shirley, Anne leaves Green Gables and her work as a teacher in Avonlea to pursue her original dream (which she gave up in Anne of Green Gables) of taking further education at Redmond College in Nova Scotia. Gilbert Blythe and Charlie Sloane enroll as well, as does Anne’s friend from Queen’s Academy, Priscilla Grant. During her first week of school, Anne befriends Philippa Gordon, a beautiful girl whose frivolous ways charm her. Philippa (Phil for short) also happens to be from Anne’s birthplace of Bolingbroke, Nova Scotia. Anne, always the good scholar, studies hard, but she also has many life lessons. This book sees Anne leave behind girlhood to blossom into a mature young woman.

This is the third book in the series. We meet a more mature Anne, who has finally the possibility of going to college and make one her dreams come true. This is the time spent with good friends, but also the time to find true love.

If book two disappointed me a bit with respect to the first book, this one gave me back the illusions of ‘Anne of Green Gables’. The story is more focused on her and how her feelings evolve. She discovers a different life far from Avonlea and all the things that she considered familiar until then. But she sees that different does not mean worse, and that life changes, and one has to go with these changes as best as they can.

She makes a new friend, Philippa, who seems rather superficial and vane at first, but who will also evolve quite a lot in the course of this story.

And there is also love in this book. We have been watching Anne and Gilbert from the first book, wondering whether they would end up together or not. This finds a conclusion in this book, but be aware that there will be pain and there will be tears.

I am happy because I was able to reconnect with twenty year old Anne. One of the best parts of this series is how well developed the characters are, how they speak, how they breath. I care a lot for them, and I have to say that I almost cried with Anne this time again.

Colleen Winton did a very good job bringing the characters to life and making an effort in making them distinguishable. I had troubles at first though, differentiating Anne from Philippa. In some places the audio edits are noticeable, but the interpretations were so good and the story in general so absorbent, that it did not deter me from really enjoying the book.

I am really glad that I was able to review these books, and they have become my favorites among the classics. I do hope Post Hipnotic Press will also record the Anne’s remaining books and count with Colleen Winton again to bring Anne and his friends to life.

Aug. 17th:
To Read Or Not To Read
Jorie Loves A Story
Reading for the Stars and Moon
Notes From ‘Round the Bend
Haddie’s Haven