Posted May 3, 2017 by lomeraniel in Audiobooks, Review, Thriller / 0 Comments 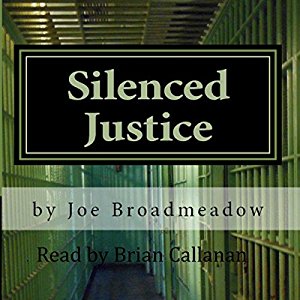 My original Silenced Justice audiobook review and many others can be found at Audiobook Reviewer.

Josh Williams starts investigating an old case, requested by his former boss Chris Hamlin. A black man, accused of raping some white woman, and killing one of them, was sent to prison and killed there. Josh’s investigations will demonstrate that witnesses had been manipulated and the truth tergiversed. During these investigations the Russian mafia tries to kill Josh’s wife, and they will realize that this case is is deeper and darker than what they thought, having very powerful people involved in covering the truth.

This is an action packed story with several twists that will delight any thriller fan. I do not know if reading the previous book of the series is necessary here. I guess it is not, since the story stands well on its own, but maybe we could get a better picture of the characters having read both books. It was an exciting listen, in which it was difficult to imagine how they good guys were going to tackle the bad guys, since they had so much power. It was quite an interesting book that I would recommend if you like this genre.

Even though it was a very interesting book, there were some aspects that would not grant it five starts. The character development was almost inexistent, the characters were flat and some of the conversations quite forced. The frivolous banter between Josh and his wife felt completely artificial, like they were just acquaintances. Also, the information was delivered mostly in dialogues and monologues, which felt forced too.

Brian Callanan’s performance was okay. The narration and dialogues were very clearly delivered, but all characters sounded more or less the same. It is true that this is not an easy book to narrate, since there were many characters, but I find it more pleasant when the narrator makes an effort in trying to make the characters sound different. That paired with the poor character development prevented me from fully enjoying this book.

I would recommend this book to any thriller fan, but if you are not into this genre you may skip it, since this book does not particularly stand among others.