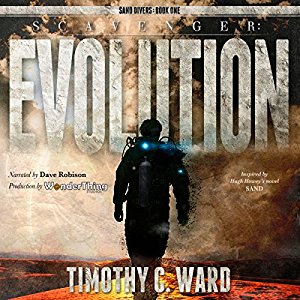 In the future, sand divers search the depths for the lost city of Danvar and the truth behind their bleak existence. Divemaster Rush hasn’t dove since he lost his infant. A job offer turns from an escape to a trap and the lure of a hardened heart to survive like anyone else would. One dive leads to another. Farther and farther from the surface, death and evolution change his world. He’ll have to change to or watch his wife rise without him.

Inspired by Hugh Howey’s world of Sand. Written and sold with his permission. Scavenger: Evolution takes the landscape of Dune and throws in the pacing and thrills of Alien.

My original Scavenger: Evolution audiobook review and many others can be found at Audiobook Reviewer.

The story of this book starts just before the bombing that happens almost at the end of ‘Sand’ by Hugh Howie. It explains who was responsible for those bombings and the journey of some sand divers in search for the city of Denvar. Ward also tried to fill in some gaps of information that Howey left missing, about other parts of the world, and how it came to be like this.

Normally I do not go for fan fiction, but having read ‘Sand’ I was very curious about this one. Sand leaves a lot of unanswered questions. It is an amazing book but the end feels rushed and leaves with more questions than answers. I had faith in having some hypothesis in ‘Scavengers’, and while part of my curiosity was satisfied, it left me with a bittersweet taste.

The idea was good, but the writing is poor, confusing, and chaotic. At some points the pace is so slow that I inadvertently zoned out, and then something sudden happened and I found myself lost in the story. The characters are quite flat and not especially likable. The only one a bit more developed is Rush, but even like that I could not connect with him either. I also had troubles understanding the changes in Star, and the relationship between them. In the way that it was described it did not make a lot of sense, and sounded more like a description made by someone with schizophrenia.

I liked the technology they discovered, but I missed some explanations, probably lost in the middle of the confusing narrations and Deus ex Machine. I am still not convinced on how it all fits with the original book. I wanted answers but I am not sure that this time I got the right ones and in the right format.

David Robison’s narration was good, and his voice seemed ideal for Rush. He delivered different voices for the characters, but I do not understand his choice for Vicky’s voice, with a lower pitch than for some of the men.

I have mixed feelings about this book. I like the world it is based on, and the idea was a good one, but the writing style was just too confusing for me to enjoy.