Posted May 27, 2017 by lomeraniel in Dystopian, Post-Apocalyptic, Review / 0 Comments 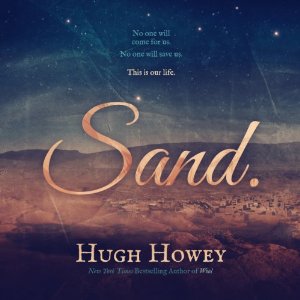 The old world is buried in sand, and the people left try to make a living from the things they can recover from it. There are specialized sand divers, who use special suits and different techniques to be able to dive into the sand like they would do it in water. It is a very dangerous job but also very lucrative. The legend talks about the ancient city of Danvar, and many sand divers will perish trying to find it. Palmer is decided to show his worth and will try to find this old and dangerous place. Palmer and his family are not the same since their father left twelve years before and never returned. The big sandy depths hide many secrets, important for Palmer, his family and all their society.

I had my eye on Hugh Howey’s books for a long time, and purchased this one and the Wool series through Audible Whispersync, but since I am always listening books for review I never found the right time. Due to one of the books I will be soon reviewing, a fan fiction inspired on Sand, I decided to jump on this one.

Howey describes the desert landscape with many rich and vivid details. It is almost possible to feel the sand stuck to your tongue, the heat from the sun, and the constant thirst. I knew about the sand divers before listening to this book, but for the life of me could not imagine how they went into the deep of the sand. Howey describes their equipment and techniques with great detail but without going into specifics. The most important thing is that he transmitted very well the difficulties the sand divers were against, and the feelings they had when they were under many meters of sand.

The characters were well developed, and their relationships and actions were realistic. It was easy to feel moved by their motivations, even if I did not completely agree with them at all times. The relationship among the family members was complex and had multiple layers, making it believable and making each character unique.

I greatly enjoyed the story. The intrigue was well built and there were some unexpected twists. When there was around one hour left I felt there was something wrong though. It seemed there was still a lot left to happen but just a little over an hour to tie the story up. The end felt rushed and I had the feeling that Howey was not telling us something. I wanted to explore the land to the East, and see how the people there lived. I really hope that Howey will write a continuation to this book and satisfy my curiosity. I read an old entry on his blog from 2014 saying that he was working on a sequel, and I hope he is getting close to finishing it. Sadly I could not find more information about it.

I found Karen Chilton’s narration correct, and making different enough character’s voices. I read some bad reviews regarding the narration of this book, but I have no complain about it. The audio production was also correct and there were no issues.

Despite the fact that the story seems unfinished, and the end felt rushed, I really enjoyed this book, its characters and descriptions. Mr. Howey, you can include me as one of your fans!