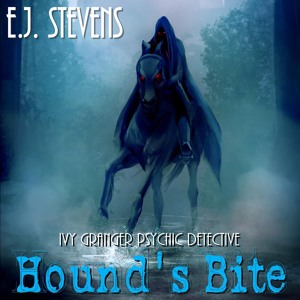 Ivy Granger thought she left the worst of Mab’s creations behind when she escaped Faerie. She thought wrong.

In a cruel twist of fate, Ivy has unleashed a powerful horde of Unseelie beasts upon her city, turning her homecoming into a potential slaughter of innocents. Now Ivy must gather her allies to fight a reputedly unstoppable force—The Wild Hunt.

Will the training Ivy received in her father’s court be enough to save her city, or will Harborsmouth be forced to kneel before the Lord of the Hunt? She is willing to risk her own life, but some sacrifices come at a cost worse than death. When an ally is bitten by one of The Wild Hunt’s hounds, Ivy must face the possibility that winning this battle may mean killing the one person she has come to love most.

When E.J. isn’t at her writing desk, she enjoys dancing along seaside cliffs, singing in graveyards, and sleeping in faerie circles. E.J. currently resides in a magical forest on the coast of Maine where she finds daily inspiration for her writing.

Join the E.J. Stevens newsletter and learn about news, events, and ghosts. Monthly news updates, tour photos, and exclusive reader perks (FREE reads & giveaways!). You can also connect with E.J. on Twitter, Facebook, Pinterest, her blog From the Shadows, and at www.EJStevensAuthor.com.

Melanie A. Mason holds a Bachelor of Fine Arts in performance and a Master of Science in Information Science with a Graduate Academic Certificate in storytelling. Her expertise is bringing characters to life, either through performance or direction. For more than 20 years, Melanie has worked in the performance and voice over industry, including commercials, audiobooks, documentaries, film, and anime. She is currently the voice of Ivy Granger. You can also hear her as Marl in Funimation’s Fairy Tail and Mrs. Shimura in Kodocha. Learn more about and connect with Melanie on Twitter, IMDB, and at www.MelanieMason.net.

Anthony Bowling is an American voice actor who has provided voices for a number of English-language versions of Japanese anime films and television series. Some of his major roles include Ukyo in Samurai 7, Shiro Ashiya / Alciel in The Devil Is a Part-Timer!, Shin Fukuhara in Baka and Test, Orito in Is This a Zombie?, Aoi Torisaki in Absolute Duo, and Jun’ichirō Kagami the title character in Ultimate Otaku Teacher. Learn more about and connect with Anthony on Twitter, IMDB, and the Anime News Network.

“Welcome to Harborsmouth, where monsters walk the streets unseen by humans…except those with second sight, like Ivy Granger.

Some things are best left unseen…

Ivy Granger’s second sight is finally giving her life purpose. Ivy and her best friend Jinx may not be raking in the dough, but their psychic detective agency pays the bills–most of the time. Their only worry is the boredom of a slow day and the occasional crazy client–until a demon walks through their door.

A demon attorney representing the water fae? Stranger things have happened. And things are about to get very, very strange as a bloodthirsty nightmare hunts the city of Harborsmouth.

There’s blood in the water…

Kelpies have a reputation for eating humans. Unfortunately, kelpies are the clients. When an Unseelie faerie this evil stalks the waterways of your city, you have to make hard choices.

The lesser of two evils…”

There has never been a better time to begin the Ivy Granger series. Grab the Kindle Edition of Shadow Sight ON SALE NOW for 99 Cents and get the audiobook for just $1.99!

The Pursuit of Bookishness

Reading for the Stars and Moon

My World In Words And Pages