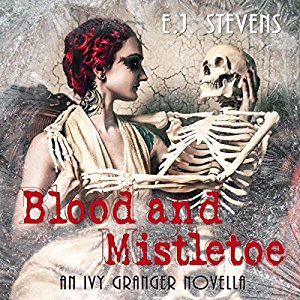 Holidays are worse than a full moon for making people crazy. In Harborsmouth, where many of the residents are bloodsucking vampires or monstrous fae, the combination may prove deadly.

Ivy Granger, psychic private investigator, returns to the streets of Harborsmouth in this addition to the bestselling urban fantasy series.

Holidays are Hell, a point driven home when a certain demon attorney returns with information regarding a series of bloody murders. Five Harborsmouth residents have been killed and every victim has one thing in common—they are fae. Whoever is killing faeries must be stopped, but they only leave one clue behind—a piece of mistletoe floating in a pool of the victim's blood.

The holidays just got interesting. Too bad this case may drive Ivy mad before the New Year. Heck, she'll be lucky to survive Christmas.

Blood and Mistletoe is an Ivy Granger series novella.

Ivy is decided to spend a normal Christmas now that she has a boyfriend. But he is called to resolve a problem, and the shortly after, Ivy will get a new case to solve. Five fae have been recently killed in Harborsmouth, leaving behind a piece of mistletoe in a pool of the victim’s blood.

After listening to book one, I have to say that I have enjoyed this one more. We are not drowned in interminable monologues and explanations like at the beginning of the series, which makes things flow more smoothly. The rhythm does not feel completely okay though, having some parts very slow and others very fast like Stevens is skipping things and not giving the grade of detail she should. I think she should find a balance to make stories more enjoyable. One tends to zone out on the slow parts and them, bam! we are somewhere else.

I had issues again connecting to the characters and feeling the urgency of the search for the murderer. I think this is due to the issues previously described. It is true that it is a bit better compared with book one, but there is still a lot of room for improvement.

What I did not enjoy at all this time was the narration. It was mostly done by Melanie A. Mason. Although her interpretation skills are quite good, I missed some different voices for the different characters. All sounded the same. David Wilson Brown had a few lines corresponding to some characters, but his interpretation felt out of place, and it did not make sense that a male narrator was used for female characters when there was already a female narrator. This confused me a lot, since at first it seemed Brown’s voice was used for male characters, as it should have been. I wonder who made this decision and why. The audio production had several issues too. There are several very noticeable audio edits on Melanie A. Mason’s part. So noticeable that for those bits it seems she was using the unedited audio. Brown’s parts sounded louder than the rest, which felt quite abrupt and broke the rhythm of the narration.

Also, it could be a personal preference, but I preferred Tracy Odom as Ivy Granger. This is one of those series where we get a change of narrator. Books one and two are narrated by Tracy Odom, while the rest are narrated by Melanie A. Mason and a male narrator. I guess this is due to Mason’s limited voice range.

I am curious as to where this series will go, so expect more reviews in the next weeks.