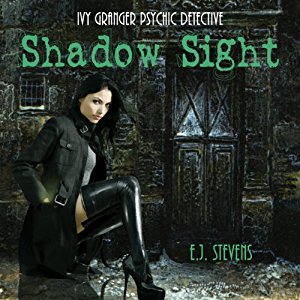 Welcome to Harborsmouth, where monsters walk the streetsunseen by humans…except those with second sight, like Ivy Granger.

Some things are best left unseen...

Ivy Granger's second sight is finally giving her life purpose. Ivy and her best friend Jinx may not be raking in the dough, but their psychic detective agency pays the bills—most of the time. Their only worry is the boredom of a slow day and the occasional crazy client—until a demon walks through their door.

A demon attorney representing the water fae? Stranger things have happened. And things are about to get very, very strange as a bloodthirsty nightmare hunts the city of Harborsmouth.

There's blood in the water...

Kelpies have a reputation for eating humans. Unfortunately, Kelpies are the clients. When an Unseelie faerie this evil stalks the waterways of your city, you have to make hard choices.

The lesser of two evils...

Ivy Granger has a power called Psychometry, which allows her to see visions related to the objet or being which she is touching. This power is more of a curse than a gift for her, since she can be overwhelmed at any given time with the most powerful visions. Nevertheless she is using this power to assist her with her cases on her psychic detective agency: Private Eye; which she runs with her friend Jess. They have a new and unexpected client with a strange inquiry. Ivy is about to reject, until she realizes that all lives in Harborsmouth are at stake.

The premises of this book were great and very interesting. I was ready to like Ivy Granger’s world. But the E.J. Steven’s writing style got in the way. The book is written in first person, from Ivy’s point of view. The problem is that each paragraph is a deluge of information. I expected this to last just for a little while, until we got acquainted with Ivy’s world and its fantastic creatures, but no, this continues on and on throughout the book until the very end. I have the feeling that very few things happen, but we are overwhelmed again and again with information. I found it irrelevant most of the time, since a big part of it were repetitions of the same information. I think a writer to be able deliver information in subtle and diverse ways, not just vomiting tons of information on monologs like it happens here. I kept zoning out all the time due to this, since the avalanche of information was just too much to consider everything important.

There are interesting characters in this story but I could not connect to any of them since we are seeing them with Ivy’s eyes, and I got annoyed fast at her long and broad explanations. There are also multiple fantastic creatures which denotes a rich world construction, but all the random data we are given was not enough to bring them to life.

I felt no sense of urgency but this was probably due to the writing style and the little action happening among all that information.

I think Tracy Odom’s narration was really good, despite the material she had. In a way it was what kept me going. She is expressive and offers a varied range of voices for every character. In some cases I found them too theatrical, but it is true that we were facing fantastic creatures that were just described but were not too developed.

I will continue with this series because I am curious about Ivy’s evolution and I want to check if Steven’s writing style has improved after this first book.