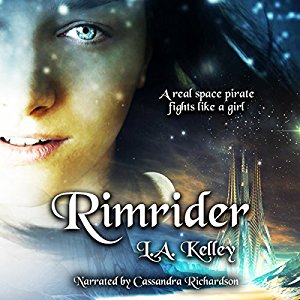 Teenager Jane Benedict is awakened by her father and ordered to memorize a mysterious code. Hours later, Mathias Benedict is dead and Jane and her brother, Will, are wards of United Earth Corporation. To evade the company's murderous clutches and uncover the meaning of her father’s last message, Jane leads Will on a desperate escape across the galaxy aboard the Freetrader smuggler ship, Solar Vortex. Tangled in the crew’s fight against UEC, Jane saves the life of young smuggler Maclan Sawyer and learns her father’s code identifies a secret cargo shipment that may spell doom for the entire Freetrader cause and the extinction of an alien race. Piracy, intrigue, romance, and a daring rebellion from Earth wait on the planet Rimrock. Will Jane answer the call to adventure and find new purpose on the galactic rim or will death for high treason be her fate?

Jane and Will Benedict are informed one day that their father has just died in a random accident at work. This happens just some months after their mother’s death. Both events don’t seem fortuitous to Jane, especially because the morning their father died, he confided her with a secret code but with no explanations. Jane and Will’s parents worked for the United Earth Corporation, and Jane suspects they are behind their parents’ deaths. Since Jane and Will have no close relatives, the UEA will take care of both kids, who will be sent to separate places and will be probably ‘lost in the system’. The only chance Jane and Will have is escaping to the Rim, where criminals are sent to work on the mines for the UEA. They hope to find their aunt there, who was exiled many years ago. With the UEA giving them chase, they get on board of the Solar Vortex, just to discover that it is in fact a smuggler ship.

As I have explained many times, I am cautious about YA books. They need to have a really good story and solid characters to be able to satisfy me. This is why I always think twice before reading a YA story. Rimrider soon caught my eye because it was a space opera with quite interesting premises. And I’m glad that I went for it!

The introduction is quite short in this book. We meet the main characters, soon the conflict happens, and we are immediately thrown with Jane and Will into the middle of the action. I don’t mind having having longer introductions, but I have to say that the fact that the conflict was clear from the very beginning helped to capture my attention from the very start.

The characters are amazingly well built and they feel like real people. Despite how quick the beginning felt, I was already committed to the story and cared for Jane and Will. Their actions and dialogs felt so natural that it was like being among friends, with their virtues and flaws. More characters were slowly introduced later on in the book, and each had their own personality. I found easy to connect to them, and this is, in my opinion, one of the keys for a successful book.

I found the plot very entertaining, and the world building was also great. Somehow it felt like a ‘Firefly’ for YA. I have to say that even though the main characters are teenagers, this is one of those books that can be enjoyed by people of all ages, since the story is more focussed on a greater good than just simply teenage stuff.

Cassandra Richardson’s narration was pleasant to the ear, with a clear voice and good audio production skills. She poured the right amount of emotion onto the character’s interpretations, and had a decent voice range, even though I got a couple of characters mixed up because they sounded quite similar. Something that bothered me a bit was the condescending tone used several times during the narration parts, where I could hear Richardson smile and talk like she was addressing young children. I think this style only works on children’s book, and even like that it has to be done in a subtle way. Fortunately, this happened less and less throughout the book, and I did not notice it on the second half.

I loved this book, and even though the story in it is complete, there is a greater conflict in which Jane and his friends are involved. I am looking forward to the sequels, and happy to have discovered an interesting sci-fi series.

I live in Florida and have been writing fantasy and science fiction adventure stories for all ages since I was old enough to chew on a number two pencil. All my books have adventure, humor, and a little romance because life is dull without them. I don’t write graphic sex or gore so your mama would approve, but I do add a touch of cheeky sass so maybe she wouldn’t. In my spare time I call in Bigfoot sightings to the Florida Department of Fish and Wildlife. They are heartily sick of hearing from me. Follow my Amazon Author Page at http://amzn.to/2fCLss0

Cassandra Richardson is a multi-discipline artist specializing in Audiobooks, Musical Theatre, and Film. Her eclectic background has resulted in a varied and exciting career. You can see her on the stages of Southern California and in three indie features coming out in 2018. Her audiobooks are primarily Young Adult Fantasy / SciFi and The Rimrider Series is among her favorites! Who doesn't love the idea of being a space pirate? Giving voice to Jane and her band of fellow pirates has been a wonderfully creative experience. You can find her on the web at CassandraNuss.com and on Instagram @CassNussEverdeen.