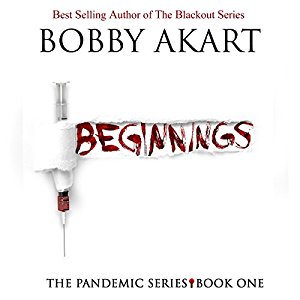 They attack with impunity, and without prejudice.
Their goal - to destroy you, from within.
A merciless enemy, just one-billionth our size.

WELCOME TO THE NEXT GLOBAL WAR

Terrorists kidnap and blackmail a young French scientist in Western Africa. The outbreak of an ancient disease kills everyone in a village located in a remote jungle of Guatemala. U.S. government operatives uncover a secret biological laboratory in Trinidad. An isolated death at the hands of this killer virus is discovered in Greece.

Is there a connection, or are these simply a string of coincidences?

Dr. Mackenzie Hagan, a highly-educated, well-respected epidemiologist at the CDC-Atlanta, is called to Guatemala. As the daughter of a retired Commanding General of the United States Army Medical Research Institute of Infectious Diseases, Mac often says infectious disease is in her blood. While no infectious disease outbreak is routine, this particular hot zone in Guatemala has its own set of complications - including a mysterious operative sent there by the Department of Defense. Events unfold and Mac is sent around the world investigating new cases involving this same, rare disease.

Nathan Hunter, a covert operative within an off-the-books project for the DOD, tracks down terrorists before they strike. As Hunter unravels a villainous plot with tentacles spanning the globe, his investigative path crosses with Mac's. Was it fate, or something else? Mac and Hunter work together to analyze the disease and to identify the source. But they soon learn that the biggest challenge they'll face is right at home - a government bureaucracy unwilling to sound the alarm to protect the nation.

As the disease spreads and the crisis escalates, an army lurks in the shadows - one blessed by Allah, and prepared to wage the Final Jihad.

This series will be frighteningly realistic. It is not intended to scare the wits out of you, but it might just scare the wits into you. Remember, it could take just one cough, one kiss, or one touch to change not only your life, but the lives of everyone around you -- forever.

This is an ingenious, inventive thriller about the threats we face from a global pandemic, and the use of infectious diseases by terrorists as they wage jihad around the world. Drawing on his unique talent to place the reader in a post-apocalyptic world, Bobby Akart delivers an explosive page-turner that has you wondering - will there be a last patient?

Note: The Pandemic Series does not contain strong language. It is intended to entertain and inform audiences of all ages, including teen and young adults. Although some scenes depict the realistic threat our nation faces from a worldwide pandemic, and the societal collapse which will result in the aftermath, it does not contain graphic scenes typical of other books in the post-apocalyptic genre. I believe more of our young people need to lead a preparedness lifestyle. Studies show that our millennials do not have any of the basic survival skills. By writing this series free of vulgarities and gratuitous sexual innuendo, I've intended it to be suitable for everyone. Thanks.

My original Pandemic: Beginnings audiobook review and many others can be found at Audiobook Reviewer.

A French scientist working in West Africa is kidnapped and made to work for his captors. Six months later people start dying in in small village in Guatemala, and soon after also in Greece. Dr.Mackenzie Hagan is in charge of this investigation, and she will soon learn that all these facts are related. Mac will try to find a way to fight what appears to be biological terrorism.

I always find medical thrillers amazing because what they describe feels so real. When I was listening to this audiobook I was imagining how plausible this was, and it was scary. Akart does not go very deep into the science behind but utilizes Mac to give clear explanations about how the plague works and the possible scenarios.

Mac is the main character in this story. She is good at what she does, but she is also funny, and has a human side always present in the story. There are several parts in the book, as the plague appears in several parts of the globe, but they are nicely tied together thanks to this character. There are a couple of important characters after Mac, and while they are less developed, I also found them realistic. The dialogs are well constructed and they feel natural and fluid.

I wanted to mention that this book, although it is not a short one, is just a first approach to the situation. We are left with a cliffhanger, which had me wanting to know more and how humanity was going to be saved from this.

There is some unjustified romance in this book, where the guy is nice, handsome and rich. This was uncalled for, in my opinion. And the fact that Mac at some point affirms that she believes in fate. For someone who does not, this sounds kind of hollow.

The type of narration in this book is called duet narration, in which the male narrator interprets male characters and the female narrator does female ones. While I am not a fan of dual narration (narrators taking turns in reading complete chapters), duet narration is something I can get used to, since the listener needs to pay less attention to which character is talking. The volume and transitions between both narrators were well done, and I did not notice any kind of the initial discomfort that I have had in other books. John David Farrell played well different voices, but his British accent did not convince me. Kris Adams has very good narration skills, but I felt that the female characters sounded quite similar (I had troubles discerning between Mac and Jeannie).

There is an incorrect pronunciation for Cerro de Muerte, using the Italian pronunciation instead of the Spanish. This is something that often happens in audiobooks. I just wish that narrators took the time to check pronunciation of words in other languages.

I really enjoyed this audiobook, which I found scary at times. I would totally recommend it not only to medical thriller fans, but also anyone who enjoys a good thriller.