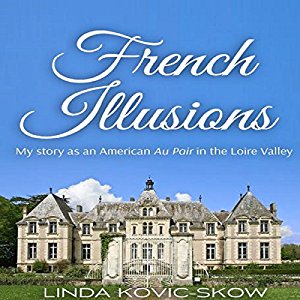 Linda Kovic has great expectations, she wants a more exciting life than the one she has, so she decides to apply for a job to become a flight attendant. There is just one problem: she needs to be fluent in a second language, which she is not. To remediate this she takes an au pair job in France… saying that she speaks the language. Her lie will not help her at her stay at the Dubois’ and things turn out much more difficult than she expected.

I was very curious about this book since I also lived abroad for some years, in a country where I also did not speak the language(s). Apart from being a new experience and being completely alone, which makes things hard, the fact of not speaking the language can be disheartening sometimes, and some people are not as hospitable as one may think.

It is difficult to review this book without judging Linda. She was very young, and at that age everybody makes wrong decisions, expecting things to come out right. Life teaches you to think twice next time. Nevertheless she was also very unlucky with the family she met, having to act like a servant, more than an au pair. And off course she was in clear disadvantage, not speaking the language and feeling that they were doing her a favor for accepting her in that situation.

Now, talking about the book, the style was poor, with repeated expressions here and there. Very often we were given a sentence in French and then the translation to English. The French was very basic and I I think everyone with a basic level of French could understand it, so it felt a bit reiterative. I think the cleanest thing would have been just offering the sentences in English or mentioning that Linda did not understand something. I felt that the book was written like one would write a diary, without polishing the edges. It was entertaining enough and I wanted to see what happened in the end. We are left with a cliffhanger, which feels kind of cheating, but I understand that the second story will be a lot different, and this may justify separating them in two books.

Despite being this a real story, we know very little about Linda and the rest of the characters. They do not completely feel real and all the story feels flat and skimming the surface. They were real friends to her, but why? I expected more from it but it felt a bit superficial. The beginning is a series of anecdotes with the family, but there was a lack of continuity or purpose.

Something I missed were more temporal references. It is not clear to me how long Linda was expected to work at the Dubois’ and how long she actually stayed. This made the book feel a bit disjointed.

Lucy Floyd did a wonderful job narrating this story. Her pronunciation in French was very good and the French accent when speaking English was very realistic. She portrayed well the main character and gave different touches to every character.

Despite the issues I explained, I enjoyed the story, and knowing that they were events happening to a real person makes you want to see how things turn out in the end.