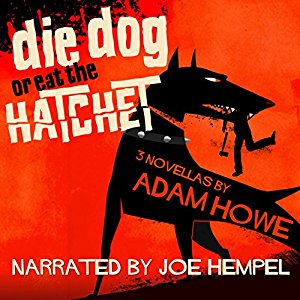 When I heard that Adam Howe won the Stephen King’s On Writing contest, I knew I was going to enjoy this book. It is composed of three novellas, they are all horror but quite different from each other.

The high school football mascot, Boogaloo Baboon, has been kidnaped by what the people in town call the Bigelow Skunk Ape, the local Bigfoot. Reggie Levine, a strip club bouncer decides to rescue him, but in the way he will find a professional skunk ape hunter, which is also crazy and will make things more difficult.

Damn Dirty Apes is a mix of comedy and horror. Scary but also hilarious in a way that will not leave you indifferent.

DIE DOG OR EAT THE HATCHET

I think this is my favorite from the book, since it is really scary and when I though things could not get worse, they did. Psychopath Terrence escapes from the asylum and decides to strike again when he meets Tilly, a diner waitress. What Terrence did not know is that there are bigger psychopaths than him in the world.

This was scary, horrendous and very graphic. Is you want a horror story with lots of blood, gore and images that will stay with you for a long time, this is your story.

This novella was also very good, if you just overlook the stupid actions made by the main character at the beginning of the story. He accidentally kills his mistress’ husband and runs away to Louisiana, where he decides to stay at a bar where the owner keeps the largest alligator in the area. The barkeeper likes to feed his alligator with ‘special alligator bait’, also helping to make some problems disappear. Our main character falls in love with the barkeeper’s wife, and will have to try to avoid being gator’s food. The problem is, everything backfires here.

I liked the atmosphere created in this story, and the characters were more developed than in the two previous ones. It feels less scary than Die Dog, but here it is easier to connect to the main character and share his motivations, even if they are not the right ones.

They are three different stories, each one putting emphasis on a different aspect: Damn Dirty Apes is comical, Die Dog is raw fear and Gator Bait is a psychological horror story. I think there is a bit of everything for any horror fan.

One of my main motivations to listen to this book was that it had been narrated by Joe Hempel, since he is become one of my favorite narrators this year. He can interpret any character, capture the emotions from the narration, and transmit them increased to the audience. I know that I will be getting an extra bit if a book is narrated by Hempel. And I was right again.