Posted May 12, 2017 by lomeraniel in Audiobooks, Horror, Promos, Review / 2 Comments 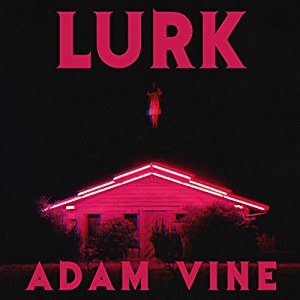 Some secrets should stay buried….

College student Drew Brady never wanted the power to spy on his friends. But late one night, he finds a box of old Polaroids buried under his house that can change to show him whatever he desires, and Drew finds himself with the power to watch the people around him without them ever knowing.

Yet as Drew falls deeper into the rabbit hole of jealousy and despair, he begins having strange visions of the students who lived at the house 20 years ago and the gruesome fates they met after moving out. He finds evidence of a stalker who may be living on the property. The line between reality and nightmare blurs. Drew realizes there is something under the house that is manipulating him through the pictures, an eldritch, not-quite-dead thing that will drive him to do unspeakable evil if he doesn’t look away….

A blistering horror story, Lurk is unlike anything you’ve ever heard.

Adam Vine was born in Petaluma, California. By day, he is a game writer and designer. He has lived in four different countries and visited almost thirty. His short fiction has appeared in various horror, science fiction, and literary fiction magazines and anthologies. When he is not writing, he is traveling, reading something icky, or teaching himself to play his mandolin. He currently lives in Germany.

A devoted Midwesterner, raised in rural Wisconsin and transplanted to Tulsa, Oklahoma over three decades ago. A career-long voice-over and music radio guy, my iPhone playlist ranges from Alice Cooper and Waylon Jennings to Twenty One Pilots and The Zac Brown Band. Favorite reads are dominated by political biographies (Lincoln, Truman, Kennedy)…and Stephen King. And now Adam Vine…’cause day-um that Drew Brady is one twisted mother!

I received this audiobook as part of my participation in a blog tour with Audiobookworm Promotions. The tour is being sponsored by Adam Vine. The gifting of this audiobook did not affect my opinion of it.

The house at Sunny Hill has seen many tenants over the years. Drew Brady, one the current ones, a feisty group of college students, finds a box full of old polaroids buried in the cellar of the old house, showing tenants from twenty years before, mainly drinking and partying. It seems a random find until the pictures start changing and showing him what happened to the people in the pictures and how they died years later. They want something from Drew, and he is the perfect target due to the many insecurities has.

I like horror novels, but I have to say that at first I was not sure about this one. The characters did not seem interesting at first, spending all the time drinking and partying. We do not know a lot about them, and it seems they never go to class or study. The language seemed a bit clanky until I found out that the complete story is written from the point of view of one of the college students. Also, most events happen during the Christmas break, so this justifies that they were not going to lectures or studying. I was not sure about it though, but then the story trapped me and did not let me go. This is a mix between horror and psychological thriller. We are inside Drew’s mind, and we soon see that there is something terribly wrong with him, and that those polaroids are destabilizing him even more. I think the book also makes us think about Drew’s choices and what we would have done in his place. It is easy to judge from outside, but Vine is so good at getting the reader inside the character’s mind that I found myself sometimes completely understanding Drew and almost agreeing with his decisions.

The plot was finely executed, introducing new elements and clues, but even like that I did not see most of the things coming, which is something I appreciate when listening to a horror novel: I need to be surprised. There is some gore but not too much compared to other books of the same genre, and the gore scenes are quick and not too detailed. The book focuses more on the psychological horror, and how everything depends on Drew’s sanity.

At the beginning of some chapters we are told Drew’s evolution over the years by having a description of old pictures. I think this worked well with the main book theme.

Kevin Meyer delivered a great narration. He was able to become Drew and transmit his fears and insecurities. I could clearly feel Drew’s transformation not only by his actions and words, but also by Meyer’s great interpretation. I have to say that Meyer was able to deliver a laugh so creepy that I almost got goosebumps.

Against what I expected when I started this book, I can say that it is a hidden gem. There is a lot more than what meets the eye, and I would recommend it to anyone who would enjoy a psychological thriller.

May 7: Read Day and Night
A Book and A Latte

May 8: Dab of Darkness

May 9: The Desert Bibliophile

May 11: The Pursuit of Bookishness

May 15: The Bookworm Lodge

2 responses to “Book Review and Spotlight: Lurk by Adam Vine”