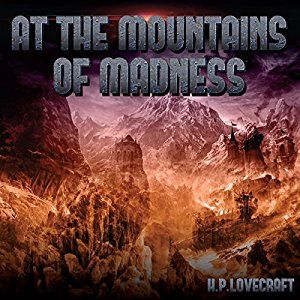 Long acknowledged as a master of nightmarish vision, H.P. Lovecraft established the genuineness and dignity of his own pioneering fiction in 1931 with his quintessential work of supernatural horror, At the Mountains of Madness. The deliberately told and increasingly chilling recollection of an Antarctic expedition's uncanny discoveries --and their encounter with an untold menace in the ruins of a lost civilization--is a milestone of macabre literature.

This book narrates the strange events during an expedition to extract minerals in the Antarctic. The members of the expedition find strange creatures and the places where they dwelled. Unfortunately not all of them make it back.

I always like to review classics. I was especially interested in this one, since I remember ‘The Call of Cthulhu and other weird stories’ with great fondness. Lovecraft has a unique talent for suspense and scare his readers without showing but just suggesting. His descriptions are very powerful in evoking horrendous feelings in the reader. He uses a rich language, while keeping his style scientific.

Having this upfront, I want to clarify that I think Lovecraft’s style works best for shorter works, like the ones  he is most prolific at. The part about exploring the old city felt really long without having much new information. We also have to take into account that the book was originally published in 1936, and writing style has suffered an evolution since then. I find other styles aging better but we cannot deny that Lovecraft’s writings are unique.

Another issue I found is that, despite Lovecraft’s abilities in suggesting without showing, here we get an ample report about the creatures they found. It would have been nice to see these creatures in action, but then it would not have been Lovecraft.

The characters were not very developed, and everything is shown from the point of view of the same person. The book is written like if it were a diary, so this explains the lack of character’s depth.

Even though these minor issues, Lovecraft’s prose kept me hooked and intrigued, which I consider a success, since I understand these were part of his main goals.

Ron Welch’s narration was superb. I find difficult to narrate diaries written in a scientific way, to make them compelling and inflict the right amount of emotion to certain parts. And Ron Welch has made it here. The audio production was also correct. I am not able to review Welch’s voice range since the book is written from the point of view of just one character.

I received a free copy of this book in audio format from the publisher in exchange for an honest review.