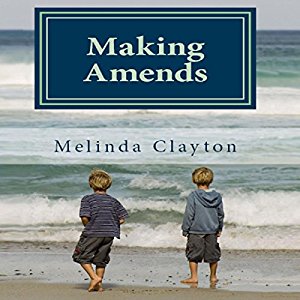 Making Amends is the heartwrenching story of a dysfunctional family composed by an ex-alcoholic mother and two twins separated at the age of five. Tabby and her son Robert stayed together and counted with the help of Vonn and Ben, an older couple which helped Tabby to get back on her feet, and whom became part of the family. Bobby, the other twin, was taken by Vernon, his father, who also had problems with alcohol and drug abuse. Twenty five years later, Bobby appears in the news after killing his father, and Tabby’s mind goes back in time thinking of all the times she wished her boy would have stayed with her. When brought back to be judged, Bobby escapes, and Tabby wonders if her baby will come back home, to the same old apartment in Florida where she always lived.

This is one of those books that keeps you thinking for a while after finishing it, thinking if things could have gone any differently if the characters would have made different choices. In a way it is filled with ‘What if’s’. I am not going to lie, saying that it is a nice book with a happy ending; but I will tell you that it is a very beautiful story with really charismatic characters. The book is written in first person, but the point of view switches all the time. It is easy to follow though, since each chapter starts announcing the name of the character that will do the talking. The characters are far from perfect, they have the flaws of real people, and the are fully developed. Tabby, Vonn and Ricky take turns to tell this story, and we will travel with them to their past and see the present through their eyes.

I did enjoy Michelle Babb’s narration. She had distinctive rich voices and accents for all the characters, and she made me feel like I was watching a movie instead of listening to an audiobook. Clayton did a good job with dialogs, which were natural and well constructed, but I have to say that thanks to Babb, who interpreted them wonderfully, the dialogs were brought to life.

I loved this book, but it left we with a bittersweet aftertaste. I guess things do not always turn the way we want, or the way the characters in our favorite books want. I think this aftertaste is a victory of Clayton, who created characters for which I deeply cared.