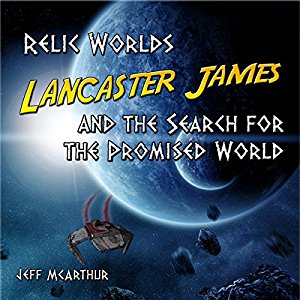 My original Relic Worlds – Lancaster James and the Search for The Promised World audiobook review and many others can be found at Audiobook Reviewer.

Lancaster James is an adventurous man who travels to far away planets to investigate long forgotten races. Little Jack will often join him in his pursues and together they will meet many challenges. In this occasion they want to find the truth behind a valuable medallion, which seems important enough to have many important people willing to kill in order to get it. The truth behind it will not be money, nor power, but just a very important discovery about an extinct race.

If you think that the title of this book sounds a bit like ‘Indiana Jones and the Temple of Doom’ or another of these movies you are right. Lancaster James is the Indiana Jones of the future, with his brimmed hat, traveling from planet to planet, studying old civilizations and always hungry for risk. It is not a mere copy of the old hero but a different approach to the classic adventurer. The book is highly entertaining, and it kept my attention until the very end, when we discover the truth about the extinct race. The characters were archetypes but interesting enough to be almost alive. I missed though some more dialog, especially at the beginning and maybe some more details about their personalities. Towards the end the book feels much more dynamic. Something that also changed and improved along the book were the constructions and fluidity of the narration. At the beginning the book was plagued with expression and repetitions like ‘Lancaster did this. Lancaster did that.’, but after a while the style becomes more fluid.

The characters were each introduced in a new chapter, which helped not to be overwhelmed with many characters at once. I cannot help but feel that this book was written in a very cinematographic style.

Jon Ryan’s narration was clear but lacked personality and tone modulations, sounding a bit robotic at times. I had several issues with the audio production. It seems pauses where artificially shortened, becoming too short at times, something that I noticed mostly at the beginning. On two occasions there is a repeated sentence and there were two times when something was incorrectly edited out, breaking the sound in mid word. We can only imagine what it should have been said, because those parts were edited out. The music between chapters was a nice touch to give some ambience, but the editor did not play very well with volume controls, and there are a couple of times when the music masks the narration and it is difficult to understand what Ryan is saying.

I found the narration speed higher than usual. It was not an issue since I tend to play books faster than regular speed, but in this case 1X or 1.1 X was fine for me.

All in all, I really enjoyed the audiobook. The story was amazing, full of details and charismatic characters. I just wish there had been some more attention put into the audio production.