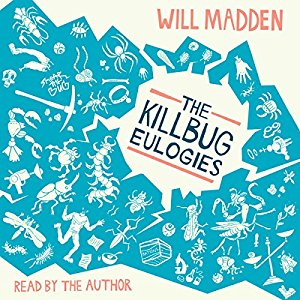 Disemboweled by the razor scythes of a six-foot mantis, lobotomized by hungry larvae, or roasted on an exoskeletal skewer: these are only a few of the disgusting ways to die in humanity's hopeless war against giant space insects. Deployed on a brutal bug planet without a chaplain, a depleted infantry unit has entrusted its eulogy duties to the soldier standing closest at time of death. Somehow this rotten privilege keeps falling to Pvt. Timothy Archon.

Archon's speeches explore the strange obsessions the men have developed since the war began--from archiving killbug death psalms to trying to seduce the enemy. Did these manias somehow redeem them, or only bring them quicker to their messy ends?

But more importantly: Why does Archon keep having such terrible luck?

Earth has been destroyed by the killbugs, an alien race similar to insects but much larger and dangerous. Now stranded on a killbug planed, several man are participating in this war, and dying. Since their chaplain has also died, Timothy Archon will be in charge of the eulogies for his fallen friends.

This book is a satire about humanity and war. Madden uses a lot of black humor to illustrate the lives and deaths of nine men of Archon’s battalion. Some are hilarious and some just entertaining, but there is a dark and sad undertone that did not leave me indifferent.

Each chapter is a short story telling the life and death of one of these men. Most of deaths are quite absurd, as I guess happens in real life.

I have read rave reviews about this book, and I had great expectations. I found the idea quite original, but for some reason it was not my cup of tea. I think it is a book to be enjoyed in small doses, and not just in one sit.

The book is narrated by the author himself, and he did a wonderful job, artistically and technically both. He gave voices to the different characters and delivered wonderful interpretations. The audio production quality was perfect, at the level of a professional narrator.