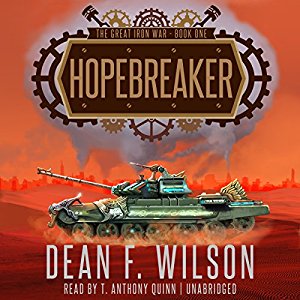 I have received a copy of this audiobook in exchange for an honest review.

Demons are conquering the world of Altadas by replacing the unborn babies. They are called the Regime, and their reign symbolizes the destruction and the power of the iron. The Resistance is trying to fight back by attempting to destroy a factory of Hope, a drug that demons need to survive. And in the middle of this, Jacob, a smuggler of contraconceptive amulets, is caught up and needs to decide if he is willing to help.

I really loved the concept, I had not read a steampunk novel for a while and I welcome this one with open arms. At first Jacob reminded me a lot of Mal Reynolds from Fireflight, and the mix of characters was quite interesting. They had a lot of potential, but remained quite two-dimensional, which kept me from really connecting to any of them, and caused their relationships not to be very interesting. I am a very curious person, and even though I don’t really need a prolog explaining everything, I wanted to know more about the demons. Who are they? Where are they coming from? Do they also have human appearance in their own world? The concept remained too vague for me and I would have appreciated more development on it. Maybe they author is reserving it for future books.

Something else that I missed were detailed descriptions. It seemed we got some details here and there but the author did not go too deep. At the same time I got confused on the action parts, not knowing very well what was happening and where everybody was. I thought this was my fault, since I listened to the audiobook and I may have gotten distracted, but I read about this too in other reviews. I also felt strange about this lack of description mixed with very poetical language and the use of many metaphors, too many sometimes, which made me roll my eyes from time to time.

The story was very good though, well planned but not very well executed. The middle of the book felt disjointed compared to the beginning and the end, and the fact that I could not connect to the characters made difficult to fully enjoy it.

The narrator did a very good job changing accents to identify characters but I do not know why German accent was used for the Regime.

All in all it was an interesting read, and I would recommend it to any steampunk aficionado.