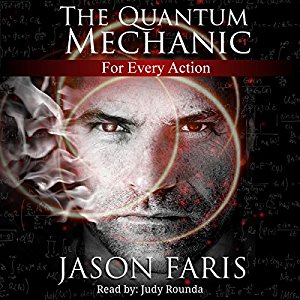 Desperate to prove that he has found the unified field theory in the Bible, young mathematics prodigy Jacob Saylor runs away to the Middle East. But when he and his brother go in search of the final piece, they disappear into the desert without a trace. Almost two years later they stumble back into a village in Tajikistan unable to remember what happened and Jacob has descended into madness. A decade passes and the young genius finds his way back to sanity. But the man who was once the world’s most promising scientific mind is so shattered that he struggles with daily life and sleeps in the back of a garage. Then a group of cybernetic terrorists calling themselves The Embodied attack. Explosions claim thousands of lives across the country and Jacob watches in horror as his family is caught in the violence. But his eleven-year-old niece manages to survive and he can see her trying to crawl from the wreckage on broken limbs. What he does next changes the world forever, and reveals that he can manipulate the very fabric of reality. In a world that has given up hope, this haunted man now has to overcome the horrors of his past and fight if mankind is to survive. But the most terrifying demons he will have to face will be his own, and redemption will mean a return to the source of his torment. The time has come for him to face the consequences of tampering in God's domain.

Can this shattered and broken soul find a way through his pain to fight for the fate of all humanity? Can he become what the world so desperately needs... one last, and final hero?

In 2018 Jacob and his brother travel to the Middle East in order to prove that he has found the unified field theory in the Bible and soon disappear. They reappear two years later, but none of them remembers what they found there, where Jacob lost his sanity. He will spend a decade trying to recover it.

In 2031, during a terrorist attack by a cybernetic group called the Embodied, Jacob’s brother and his wife result dead, and his 11 year old niece Jessica gravely crippled. Jessica is saved at the last minute by a mysterious man, able to bend reality. Jessica undergoes several operations until she is finally taken to a special laboratory where she will be integrated with an AI in order to become a weapon to destroy the Embodied.

This books starts slow but it quickly captured my attention. There are two main stories here: on one hand we have Jacob’s mystery, and on the other hand we have Jessica’s transformation. I have to say that Jessica’s part was my favorite, reminding me of Akira or Ghost in the Shell.

Jessica suffers a radical transformation, becoming not just an enhanced human being but a real machine and integrated with an AI. There are important decisions to be taken here, and Jessica showed great mature for her age. Even though Jessica is one of the main two characters, I had troubles to connect to her. The character had all the ingredients to be likable, but I think I found issues to find her believable. I agree that a severe trauma like the one she suffered can be enough to change somebody, but she seemed too mature for her age. I also had issues with her way of speaking. Somehow it did not sound natural, and found her reactions quite unusual.

I loved the part where she needs to undergo great changes in order to become a creature like the Embodied, and also the mystery around this group of terrorists. If you liked the movies I mentioned above, this book is for you.

Jacob’s story was more interesting, but I had more troubles to believe it and fully enjoy it. Every chapter starts with a Bible passage, and this is related to what happened to Jacob in the Middle East. Somehow he found a way to understand some of God’s secrets and manipulate the fabric of reality. Jacob was a mix of Jesus and super hero. I think I had more issues with this part of the story because I am an atheist, mixing scifi with religion spoils a story for me.

In the blurb it mentioned that Jacob was the mysterious man who saved Jessica from the terrorist attack. This is not implied in the book, and even though it could be suspected, this is not revealed until much later.

Judy Rounda did a great job with the narration. At first I was not sure whether I was listening to a woman or a young man. She is capable producing a great range of voices, from an old man to a young girl. Rounda used diverse sound effects to deliver recorded interviews and news broadcasts. It was a nice touch and was done in a very subtle way.

There were some audio production issues though. It was quite noticeable where some audio edits were done, and this broke the rhythm of the narration, but it was not too obvious to really spoil the book.

It was a great listen, even though it seem a bit long winded at times. I really enjoyed the cybernetic parts of the story, and I am looking forward to listening to the rest of the series, and maybe get a better understanding of Jacob’s story.