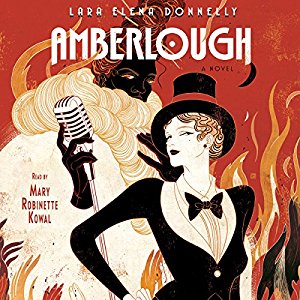 I have received this book in audio format from the publisher in exchange for an honest review.

Aristide Makricosta is a smuggler and one of the main stars at the Bumble Bee Cabaret, but he also has an affair with Cyril DePaul, a spy working for the government. None of them asks the other any questions, and they are able to have a double life until things get complicated in Amberlough. The One State Party is gaining more and more support, and under threats and bravery, the city will suffer a transition that will make life difficult for the once free inhabitants of Amberlough.

Amberlough is an ucrony based on Weimar Berlin, and the Ospies refers clearly to the nazis. The only difference here is how the Ospies reached the power, since there is no reference to any war. It is not very clear how they made it but they did. It took me some time to get into the story and the political climate in this book, since we are thrown a bunch of unknown names and alternate historical facts. The paper and electronic editions include a map of Gedda, which will undoubtedly help the reader but it is not so with the audiobook. This is the only complaint I have about audiobooks in general, since maps are an important addition to a story (and meant by the author) and its omission can cause comprehension issues. There is a lot of data at the beginning of this book, and not having a map makes it harder to the listener. This is not a critic towards this book, though, but toward audiobooks in general.

The political events were not clear all the time to me, I am not really into political literature, but the characters and the beautiful language really trapped me here. It is true that it is a bit hard to get into the story, but once you pass the fist part, you will be rewarded. There are three main characters in this novel: Aristide, the artist and smuggler, escaping from his past; Cyril, the spy living a double life; and Cordelia, dancer at the Bumble Bee, runner for Aristide, and a key character for Aristide’s and Cyril’s actions. I loved how colorful the city of Amberlough and the characters of this book were, each one with a distinctive voice, motivations and worries. All of them wanted to fight for a better life, but all of them had imperfections that made them real. The language was the baroque and artificious of the time, and the story was beautifully told.

Knowing what the story was based upon, one could expect that the last third of the book would be a dark one, and it is indeed. There is a tiny ray of hope, but the Ospies, like any fascist regime, will swallow everything and everyone, just leaving grey despair behind.

Mary Robinette Kowal did a wonderful job narrating this book, with a very clear and expressive voice. The characters’ voices were at times a bit overdone, but I think this style went perfectly with the book, and the light and artificious speech typical of this time. She also gave different voices to all the characters and it was always clear who was doing the talking. I enjoyed her interpretation of Aristides and Cyril, but I especially loved how she impersonated Cordelia.

There is extreme beauty in this book, but also pain, betrayal, and love, much more love than what the characters would admit, and this might be their undoing.