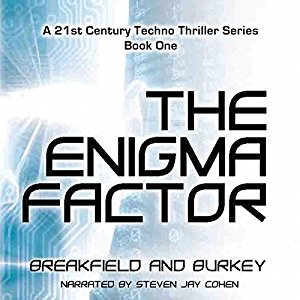 Explore the inner workings of technology in the fast-paced thriller "The Enigma Factor." Authors, Breakfield and Burkey, weave a complex tale full of danger, intrigue, and international cyber wars in their joint fictional novel debut.

Jacob Michaels is a brilliant programmer who has spent his life in the field of information protection, considering it his mission to protect major organizations from the horrific damage cyber criminals can inflict.

But it is his own life he finds in danger when rogue cyber-criminals target Jacob for inclusion in their nefarious activities. Determined, he sets off on a mission that takes him into the furthest reaches of cyber technology and is provided support through unknown protectors.

With his best friend in tow, as well as a distractingly beautiful encryptionist, Jacob's journey ultimately sets off a chain reaction involving cyber theft, international hackers, romance, and more danger than he could have ever imagined. As Jacob closes in, however, he soon learns that the line between good guys and bad guys is increasingly blurry.

Jacob Michaels is a brilliant computer programmer whose mother taught him the difference between good and bad in the years they shared before she was killed on a hit and run. He gets tickets from a mysterious company for an important convention where he meets Petra, a special girl also into computers, and which will warn Jacob about the dangers he might be facing if he is not careful enough.

As a security specialist and a background working onsite with several customers, I was quickly caught in the story. Some of the issues Jacob faced reminded me of my current and some past jobs. It is a highly technical book, with lots of specific terms. This really appealed to me but it could be a setback for less technical people.

I may also mention that some of the things described do not work in the real world. Usually, once a program is compiled, one cannot read the lines in it unless they keep a copy of the source code.

The story was well built, and the characters were distinctive enough to make this an enjoyable read. I felt though the second half a bit long winded, and despite the issues they faced, I was not invested enough to care for them. I am not sure what failed for me here. I think it was a mix of not very likable characters, an uninteresting love story, and lack of character development.

I was really bothered by how good a boy Jacob was. He had very clear that he was a white hat, and worked very long hours without complaining. He sometimes continued working in the evenings at home and did not mind getting calls from work at any time. And if he had to travel overseas it was okay too, he just needed some hours to pack and he was a happy camper. I understand that he was seeking refuge on his work after his mother’s death, but his attitude was almost monastic. I also had difficulties liking Petra, who always had quite a negative attitude seldom gave Jacob explanations he deserved. I did not care much about the rest of the characters since they were not very developed.

The love story felt like an excuse to attract some feminine readers. It did not hold and the sex scenes were just too perfect to be real. It always bothers me when this happens in books: a couple having sex for the first time and everything happening like clockwork.

I also found some sentences that should set off alarms for any woman with brains, like “inability to look like a lady”. I would expect this in a 19th century book, not in a book that claims to be a 21st century technothriller.

What I loved was Seven Jay Cohen’s narration. He struggled with some accents but displayed an ample range of voices, from male to female, making the characters more distinguishable that I am sure they would be in print. Cohen also expressed the right amount of emotions to the characters when needed.

It was a good listen, even though it felt a bit long towards the end. I would recommend it for highly technical people since all the specific terminology may scare non-geeks.

I received a free copy of this book in audio format from the publisher in exchange for an honest review.