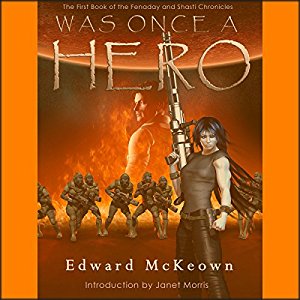 Reluctant privateer Robert Fenaday searches the stars for his lost love, Lisa, a naval intelligence officer whose ship disappeared near the end of the Conchirri War . He’s joined by the genetically engineered assassin, Shasti Rainhell, whose cold perfection masks her dark past. Both are blackmailed by government spymaster, Mandela, into a suicidal mission to the doomed planet Enshar. Leading a team of scientists and soldiers, they must unravel the mystery of that planet’s death before an ancient force reaches out to claim their lives.

Robert Fenaday is in the constant search for his wife Lisa, whose spaceship was lost during the Conchirri War. Not wanting to give up he is making money now as a privateer and at the same time, still looking for her. Blackmailed by the government, he is assigned a suicidal mission: going to the planet Enshar, and find out what was that killed the remaining population and anyone trying to approach the planet.

I found this novel quite entertaining and action packed. Robert and Shasti are quite a charismatic duo, and it is almost impossible not to fall for them. With a past in common and some dark secrets, these are the most interesting characters of the book.

There are many characters in this story, and most of them are not very developed, which made difficult at times the task of following everything. I don’t think most of them were even necessary, but I guess it is the way McKweon decided to use to show how dangerous this mission was, since many of them did not make it. Nevertheless, I think it would have worked better with less characters and more developed.

I found the mystery of the planet Enshar very intriguing, until the point where we almost know what they are up against. I found it a bit disappointing, and anticlimactic. There was something in its execution that did not completely click with me. It was a pity, since the story was quite promising.

My main issue was with the narration. I was not comfortable with David Loving’s narration and at times he seemed to run out of air. All characters sounded the same, and this is what threw me back the most, since there were many and at times it was difficult to know who was talking. I had to make an extra effort that did not really pay off.