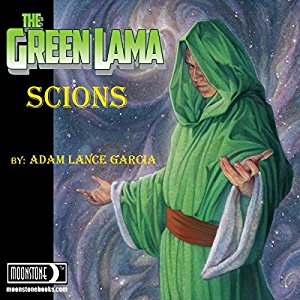 A cruise ship crashes suddenly on Liberty Island. All onboard are dead by their own murderous hands. All but one. What secrets does the lone survivor harbor within her very soul? And what horrors does she bring? These are questions only the Green Lama can answer! Reintroducing the most unique Pulp Hero ever! In reality, The Green Lama is Jethro Dumont, a millionaire playboy who spent ten years in Tibet and now uses his Buddhist training to pursue Justice for those denied it! Can even the Green Lama, with his mastery of the supernatural and his radioactive salts, be enough to prevent the coming of... Scions?

A sudden crash of a cruise ship on Liberty Island has the population in New York terribly worried. But the crash is not the most worrisome part, the real problem is that all people aboard the ship are dead with heavy injuries like they were inflicted on each other. The police and the press readily get busy with the mystery, but this is a case for the Green Lama, a superhero with mystic powers which he gathers from some radioactive salts.

I loved the pulp atmosphere in this book. The story is set and written in 1938, and listening to it one feels transported to that era. It is like watching a film noir movie. The book starts presenting the Green Lama and how he came to be. Then we are transported to the moment just before the crash. I found the premises very interesting and the mystic halo around the Green Lama very appealing.

This is a of pulp superhero with novella with Lovecraftian touches. Fans of both movements will undoubtedly enjoy this book. There are some gruesome descriptions but nothing too scary for the public nowadays.

I found quite funny how nobody, except for the reader, realizes that the Green Lama is in fact Jethro Dumont, since both had a past in Tibet. I guess it is the same as what happens with Superman; it’s super clear that Clark Kent is Superman but nobody seems to notice. I found those touches endearing.

What did not completely convince me was the amount of secondary characters for this short novella. They seem excessive and, somehow, redundant. At first I had a clear idea of who was who, but towards the end, when they join, I found it a very confusing, and I am not sure that it added anything to the story.

The narration was perfect for this story. Jiraiya Addams’ voice and style matched perfectly the pulp atmosphere of the book, and his Green Lama interpretation was sublime. He did a good job providing different voices to the characters. He also used some interesting sound effects for some parts of the book, which contributed to enrich the final product.

I really enjoyed this audiobook and I hope to listen to more adventures with the Green Lama.