Posted May 31, 2017 by lomeraniel in Audiobooks, Review, Science-Fiction / 0 Comments 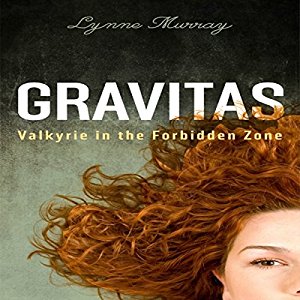 My original Gravitas audiobook review and many others can be found at Audiobook Reviewer.

Sybil from the Planet Valkyrie attends an interplanetary conference with the intention of rescuing some slaves from other planets and trade the Gravitas she is carrying surgically implanted on different parts of her body. Gravitas is a very powerful aphrodisiac, of extreme value and unique in the universe, it is also poisonous to some races and very powerful even in the smallest of quantities. But carrying so much Gravitas also has dangerous effects on her, so she will need to trade it fast. Before she can trade it, in the middle of her meditation, she is attacked by an angry warrior from a slave-holding planet, and suddenly they appear on Earth, which is in the Forbidden Zone. She will need to survive fighting against this warrior and try to go back to her planet before the amount of Gravitas she is carrying will kill her.

I would not call this book feminist, since feminism proclaims that men and women are equal, since on Planet Valkyrie, women are far superior than men, and they are allowed to have several husbands. It is also curious the fact that if two men are gay, the best option for them is marrying the same woman. Women decide, fight and carry out responsibilities. They are also very different from the beauty archetype here on Earth (at least in Western culture), finding us too weak and close to starvation. Valkyrie women are strong and of enormous proportions, they are proud of themselves and their body.

Something terribly funny about this book are the dialogs. I had a blast listening to the characters’ conversations trying to adapt to Earth and learn how to behave. The characters are not super developed but they are distinctive enough to enjoy the ride. The book is just over three hours and a half, and despite the fact that there is a lot of Deus ex Machina, the story is quite entertaining and the characters endearing.

I liked the fact that Murray created alien races which were inspired in gods from several cultures, with the excuse that they visited our world before it became part of the Forbidden Zone.

Julie Hoverson delivered a very clear and emotive narration, making clear distinctions between voices. I have to say that I found her interpretations a bit on the theatrical side but I have to recognize that giving voice and personality to a warrior from a slave-holding planet is not an easy task. I would have preferred a more neutral tone though, while also keeping distinctive voices for each character. I know it is not an easy task, but this is what separates good from great narrators.

I really enjoyed this book. The angle was an original one, and it had its funny moments. I am looking forward to read more about Sybil of the Valkyries.