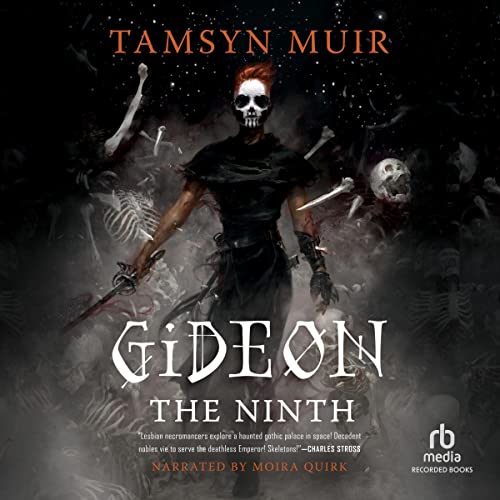 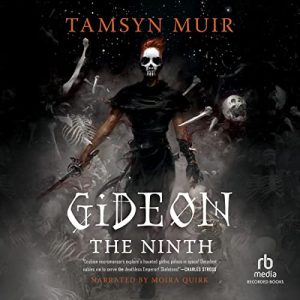 The Emperor needs necromancers.
The Ninth Necromancer needs a swordswoman.
Gideon has a sword, some dirty magazines, and no more time for undead bullshit.
Brought up by unfriendly, ossifying nuns, ancient retainers, and countless skeletons, Gideon is ready to abandon a life of servitude and an afterlife as a reanimated corpse. She packs up her sword, her shoes, and her dirty magazines, and prepares to launch her daring escape. But her childhood nemesis won't set her free without a service.
Harrowhark Nonagesimus, Reverend Daughter of the Ninth House and bone witch extraordinaire, has been summoned into action. The Emperor has invited the heirs to each of his loyal Houses to a deadly trial of wits and skill. If Harrowhark succeeds she will become an immortal, all-powerful servant of the Resurrection, but no necromancer can ascend without their cavalier. Without Gideon's sword, Harrow will fail, and the Ninth House will die.
Of course, some things are better left dead.

I had heard so many good things about this book that I picked it looking forward to some hours of fun. Lesbian necromancers in space sounded appealing, but the premises were greater than the end result. For me at least. I have to promise myself for the millionth time that I won’t be persuaded by the hype and read books that promise science fiction mixed with another genre. I love science fiction, but almost every time I read a book where it’s mixed with something else, I regret it because there is not enough sci-fi for my liking. It usually happens that when sci-fi is mixed with other things, those other things tend to be fantasy or magical realism, and no matter how whimsical the plot sounds, I almost always regret the time spent in the book.

Gideon the Ninth is not science fiction. I’d say it’s more epic fantasy with dark magic and some weird laws Muir didn’t care to explain. The world-building is very thin. I know many great books don’t info dump at the beginning, so I was waiting patiently to get some details throughout the book. But it never happened. The empire and the nine houses have existed for 10.000 years, the houses have different magic, and focus on different aspects of death. There’s not much more going on, and clearly not enough for me to call this sci-fi. There’s mention of space shuttles, but the world described in the book feels terribly anachronic to be set in a distant future. It sounded a lot more like it was set in an alternate past. In fact, the story (a whodunit) could have just skipped the shuttles entirely, or even taken place in a different world, and it would have been the same.

The characters were interesting though, and the dialogs were brilliantly written. Muir’s prose is sharp and delicious, baroque and descriptive. The setting, clothes, description, and characters’ dynamics were an enjoyable part of the book; but it wasn’t enough to counterbalance the lack of plot and world-building.

Moira Quirk did a fantastic job at bringing to life so many characters and making them distinguishable. I loved her interpretations, especially Gideon and her necromancer. I found Teacher’s voice a bit overdone though, but it was, in general,  a very well done narration.