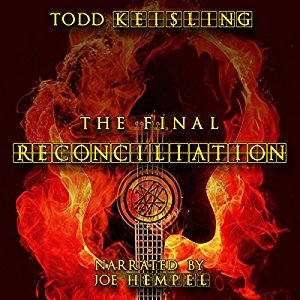 The Yellow Kings was a rock back which tried their fortune thirty years ago. Their last performance was a concert in which the band was going to play the songs for the next album “Final Reconciliation”, an album which never saw the light, because everybody but one person died during the concert that day. Mystery and horror surrounded that fatidic day, and now thirty years later, Aidan Cross, the band’s lead guitarist and only survivor will give an interview and tell all the truth about it.

The final concert by the band was in LA, referred by Camilla, the band groupie which was their undoing, as Carcosa. The name Carcosa was used for the first time by Ambrose Bierce in his short story ‘An Inhabitant of Carcosa’, and later on by horror authors like Robert W. Chambers and H.P. Lovecraft. The band’s name was borrowed from Chamber’s book ‘The King in Yellow’.

I have not read anything from Chambers but I know a bit of H.P. Lovecraft and I have to say that this story reminded me a bit of his works. The noir horror in which the most dreaded thing is the one you are still waiting for, where your imagination starts to play tricks and you just do not want to see what it is coming.

I was aware fairly quickly about Camilla’s intentions but that did not spoil the gruesome effect Keisling got with the last scene at the concert. The character’s were not specially developed, since this is not a long book (just over three hours) but Keisling totally succeeded at creating an absorbent atmosphere drawing the reader in to the terrible end.

I would like to make a comment though about something mentioned in the book. Camilla’s eyes were different colors, and it is compared to David Bowie’s eyes. Contrary to what many people think, Bowies eyes were the same color. What he had was a paralyzed pupil due to a fight with George Underwood when he was fifteen. Just a side note.

Joe Hempel did a wonderful job narrating this book, using a raged tone of voice to narrate the story from old Adam’s point of view, transmitting the emotion in the old man’s words, and the horror and guilt that have chased him for thirty years. Hempel is a top notch narrator, not only able to deliver different voices for all the characters, but also to provide an extra dimension to the story, multiplying the emotions the writer has put into the text.

This story coupled with Hempel makes a five star audiobook, something that any H.P. Lovecraft fan would enjoy for sure.